Busch began his 2017 campaign slowly, and his streak without a win reached a year before he finally took a victory in the 21st race of the season at Pocono in July.

That win came after a confrontation between his Joe Gibbs Racing outfit and eventual title winner Martin Truex Jr's Furniture Row Racing at the preceding Indianapolis's Brickyard 400 race after Truex and Busch collided on a restart, which results in the two outfits' technical alliance being restructured to avoid a repeat clash.

Busch said he did not want to take so long to get going this year.

"I don't think we would be any worse. I would like to think we'd be better," said Busch.

"We started out the season a little bit on the slower side, if you will, last year with our new car [Toyota introduced a new Camry for 2017].

"We were behind the eight-ball a little bit maybe."

In the final 15 races of the season, Busch picked up six top-three finishes - including four wins - as he became Truex's main rival in the playoffs.

"As the season progressed, we learned what things our car liked and what we needed to do in order to make ourselves better and more competitive," added Busch.

"And we were able to do those things and got it to where we were pretty fast there and peaked later in the season.

"Hopefully we can start out our year this year a little stronger than we did last year." 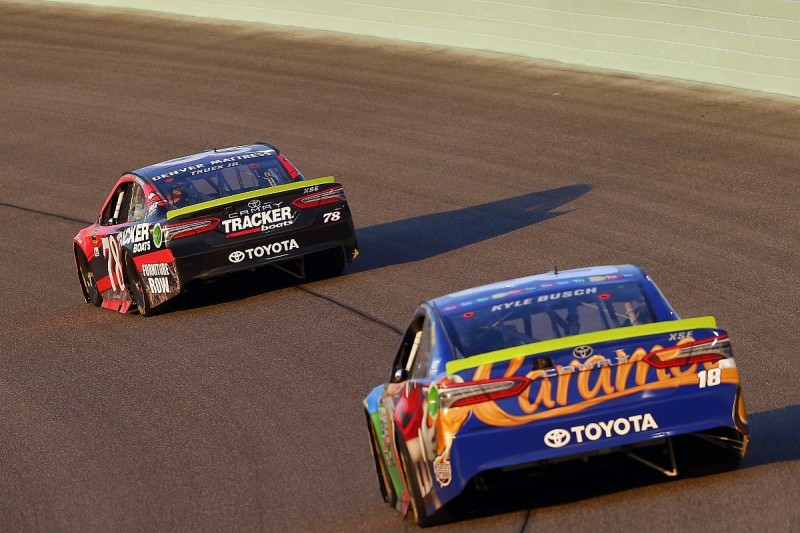 Busch added that his narrow defeat at Homestead in the final four was "painful" because he felt he was equal to Truex.

In the final stage of the race, Busch opted to only pit once as he aimed to run to the end of the race without further stops - as long as there were no cautions.

A caution with 40 laps to go ended his clever strategy and put him back on the same strategy as Truex, meaning his rival ran unchallenged to win his first title.

"I definitely feel as though we matched them [Truex] at Homestead," said Busch.

"I'd say that we were actually a little bit better than they were at Homestead, and that's what makes Homestead so painful.

"You can be a guy who wins 35 races out of the year, and then that 36th race you can finish second and lose the championship.

"We thought we had the opportunity to put the #78 bunch in that situation, but just wasn't quite able to pull it all off there at the end.

"It feels like a letdown and having the opportunity to be able to win that race, we were right there, we were real close, but wasn't able to get it done."