The 23-year-old beat 2014 champion Chase Elliott - the man who will replace the retiring Jeff Gordon at Hendrick Motorsports in the Sprint Cup - by 15 points in the final standings.

Buescher struggled for pace in the finale but picked up the points he needed to be sure of the title, with eighth the best JR Motorsport's Elliott could manage.

"I'm so blessed to be in this situation," said the champion. "It's been such a special year.

"I was really cautious around a lot of people today."

Ty Dillon and Regan Smith entered the race with an outside chance of the title, but seventh and ninth respectively wasn't enough to topple Buescher.

The race itself featured a thrilling battle between Kyle Busch and Kyle Larson for the win for the majority, until Busch was given a penalty for having an uncontrolled tyre during a late pitstop.

He then hit the wall after being tagged by Harrison Rhodes.

On the restart, Larson was shuffled down the order to fifth but passed Austin Dillon with four laps to go to take the win. 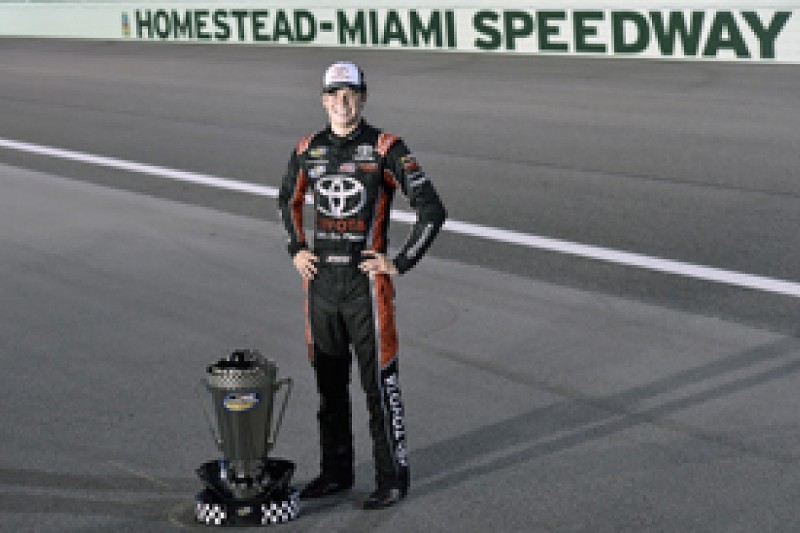 The 19-year-old, who has deputised for Joe Gibbs drivers in the Sprint Cup this season, finished sixth to become the youngest champion in the category's history.

He will now make a full-time switch to the Xfinity series next season, having contested selected races for the past couple of years.

The Truck finale was won by ThorSport Racing's Matt Crafton, who ended up third in the standings behind Brad Keselowski Racing driver Tyler Reddick.