Recently-released Netflix documentary Race: Bubba Wallace covers the NASCAR Cup driver's mission to make a difference for the better and the personal toll it has taken.

“We’ve come a long way together in less than two years and we’ve checked off some major goals along the way – including the team’s first win and first pole. We know we still have work to do, both on and off the race track, but I feel good about our team and the direction we’re heading.”

Given the recent form of Bubba Wallace in the NASCAR Cup Series, it was perhaps unsurprising that the 28-year-old American re-signed with 23XI Racing last week on a multi-year deal.

Four top 10 finishes in the last five races as well as a runner-up spot in the season-opening Daytona 500 have placed him on the cusp of this season’s play-offs with two races remaining – albeit needing a win to secure a coveted place in the final 16.

It’s a similar situation to 12 months ago and which is partly the focus of a Netflix documentary Race: Bubba Wallace that was released earlier this year.

The six-part series follows Wallace on his quest for a maiden NASCAR Cup Series victory across the latter part of 2020 – in the wake of the championship restarting due to the COVID-19 pandemic – and the 2021 season. This includes joining 23XI, co-owned by three-time Daytona 500 winner Denny Hamlin and NBA legend Michael Jordan, but the main focus is away from the tracks.

With the death of George Floyd in 2020 at the hands of police and the subsequent Black Lives Matter movement, Wallace came to the fore as an activist in his position as the only full-time black driver in the NASCAR Cup.

It’s an open and refreshing – if at times difficult – watch as Wallace recounts his upbringing, and subsequent challenges he’s faced as a black driver in a championship with its origins firmly rooted in the south of America.

The series follows Wallace as he campaigns to have the Confederate flag banned, which he succeeds in doing, as well as the notorious noose incident at Talladega and being called out by then-president Donald Trump on Twitter. 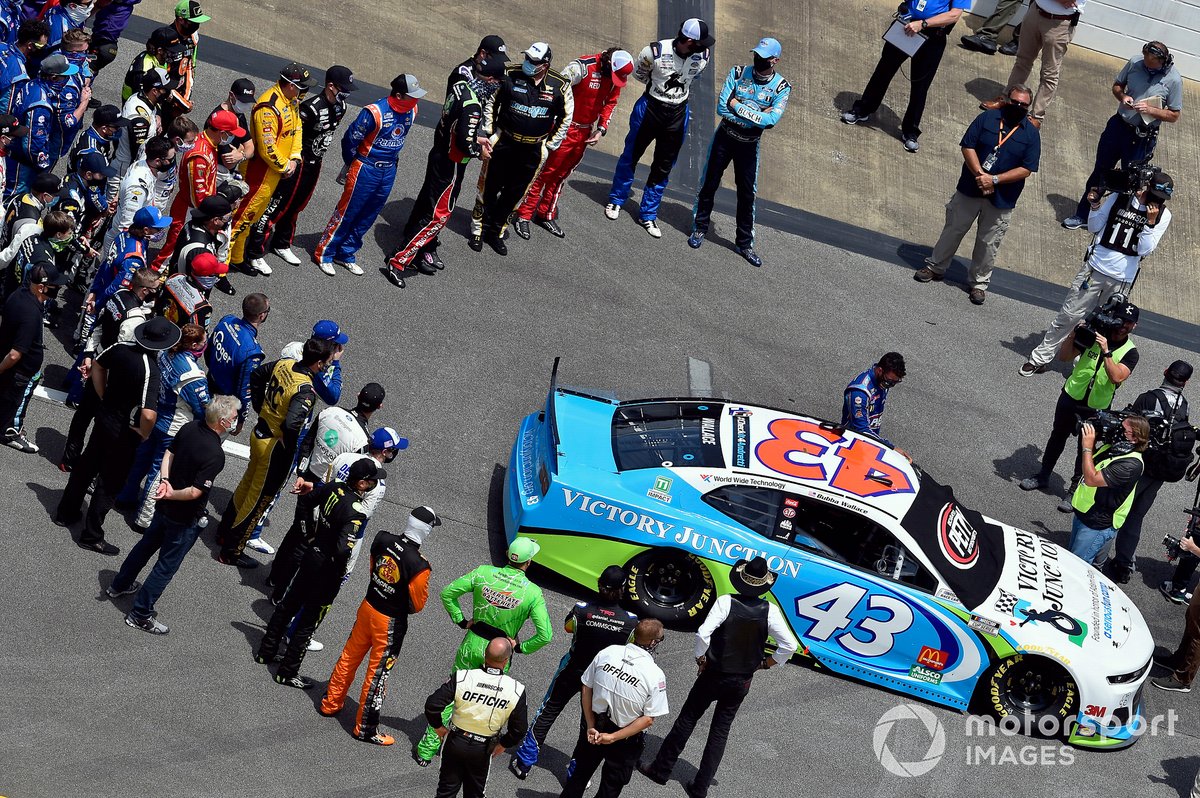 The NASCAR community rallied around Wallace at Talladega in 2020

At times it becomes incredibly moving, with Wallace recounting racial incidents and his mother talking about her fears for her son as a black man in America. But without doubt one of the most emotional pieces of footage is when the NASCAR paddock surrounds his Toyota in a show of support at Talladega when a noose is found in his garage.

Even though an FBI investigation found that the ‘noose’ had been there months prior and was not directly aimed at Wallace it still packs a powerful punch. It has to be said though that the producers build on the ‘noose’ incident, not revealing the FBI’s findings until well into the next episode.

Many important social issues are raised throughout, including depression which Wallace has suffered from, but there’s also plenty of on-track action across each episode. Multi-car wrecks are captured from every angle, including a superb POV camera attached to Wallace’s helmet, and there’s behind-the-scenes footage of Wallace and his team.

Somewhat ironically a lot of focus is given to his quest for a maiden NASCAR win, with the series ending at the final race before the play-offs where Wallace finished third on the road before being promoted to second. Just five races later, though, he took that elusive win at Talladega, which is covered very briefly in the final minutes, having likely had been added post-production.

PLUS: Why Bubba Wallace’s Talladega win is such a big moment for NASCAR

His recent performances might not quite be on par with that of a superstar yet, but his actions off-track have certainly made him one in the eyes of many.