Joe Gibbs Racing driver Hamlin led home an attrition hit field under NASCAR's new 'overtime' system to win the crash-strewn race - which serves as the curtain opener to the NASCAR season, ahead of next weekend's Daytona 500.

Hamlin was just one of eight cars to make it to the chequered flag in one piece, after three separate multi-car crashes sidelined most of the 25-car field.

Brian Vickers - standing in for the injured Tony Stewart in the #14 Stewart-Haas Racing Chevy - set off the first major incident on lap 23 of the planned 75, collecting Dale Earnhardt Jr, team-mates Kevin Harvick and Kurt Busch, as well as Clint Bowyer, Greg Biffle and AJ Allmendinger, after a right-rear tyre failure entering Turn 1.

The race resumed for a final time under NASCAR's new overtime rules, only to ultimately end under caution after Matt Kenseth triggered a six-car crash on the second of the two overtime laps, handing Hamlin his first win of 2016.

Six-time Cup champion Jimmie Johnson started from pole, but was forced out of the race with damage after a spin into the infield.

McMurray, who started 24th of the 25 cars, made an early charge to run at the front of the pack, only to be taken out in the final multi-car crash. 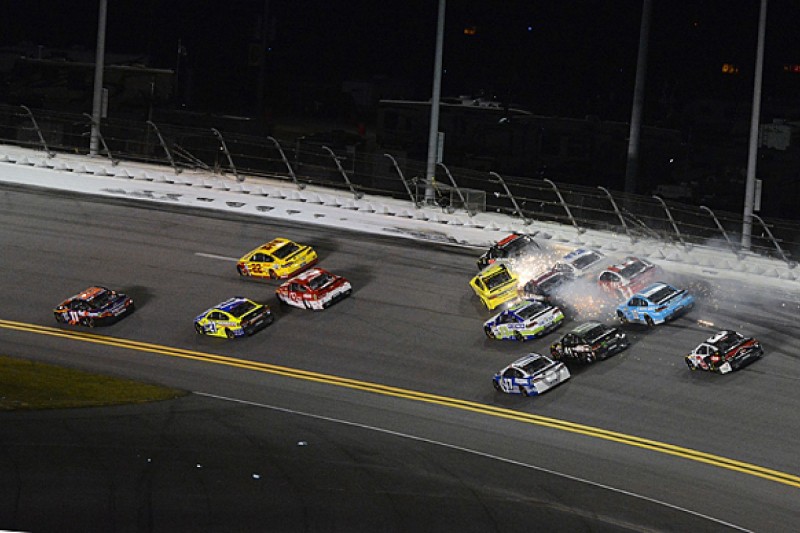