Dale Earnhardt Jr missed out on a place in the playoffs in his final NASCAR season, as he came home 13th.

In what was the last race before the playoffs gets underway, regular season champion and points leader Truex of Furniture Row Racing had dominated much of the night event and looked on course for an easy victory.

But the late caution, brought about when Derrike Cope hit the wall and which added four overtime laps, brought the pack together.

Larson got ahead of Truex on pitroad during the yellow flag period and retained his lead at the restart.

Then on the final lap Truex was nudged into the wall by Denny Hamlin as they fought over second, which allowed Larson to move clear to take his fourth victory of the season. 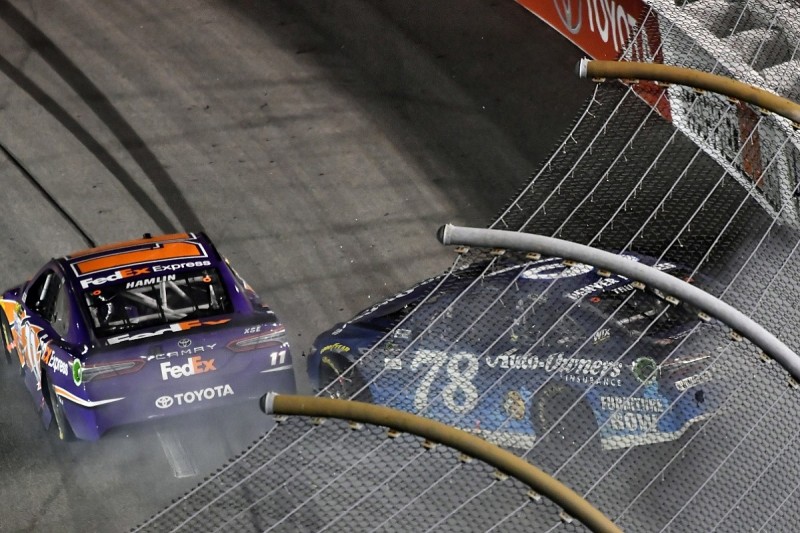 Larson's win ensured that Chase Elliott, Matt Kenseth and Jamie McMurray maintained their places as the final three drivers to enter the playoffs, with the top 16 now going on to fight for the 2017 title at the remaining rounds.

That trio could only have been vaulted by someone who had not yet won in 2017 - such as Logano - taking victory at Richmond. Stewart-Haas Racing's Kurt Busch finished fourth, while Hamlin eventually finished fifth for Joe Gibbs Racing.

Polesitter Kenseth lost his chance of victory in a strange incident with an ambulance that caused him to hit the back of Clint Bowyer's Stewart-Haas-run car, which caused damage to his radiator and put him out.

The incident happed when the ambulance parked at the entry to the pitlane, causing a concertina as the field came in during a caution period with around one third of the race remaining.

Logano's car also was damaged in the incident but he was able to continue.

Hamlin had a frustrating hometown race as he raced with Joe Gibbs Racing team-mate Kenseth at the front early on but then lost 11 places under a subsequent caution period, first on pitroad, then at the restart when caught behind other cars.

Earnhardt Jr had a strong run, though fell down the order late on after staying out on old tyres longer than most of his rivals as he had been gambling on a yellow.

Kyle Busch took stage one after vaulting to the lead at a restart eight laps before the stage's conclusion.

The caution was caused by Kenseth locking a tyre - hard enough to cause race officials to bring out the yellow flags - after he had led the entire stage up to that point.

Kyle Busch eventually finished ninth, one spot behind reigning champion Jimmie Johnson, as Chase Elliot rounded out the top 10 ahead of Brad Keselowski.