Truex's Joe Gibbs Racing Toyota Camry was sent to the back of the field, after he incorrectly cut across the line marking when drivers have to commit to entering the pitlane at the end of the first stage.

The #19 restarted in 22nd place and slowly began to make his way through the field in the first ever night race to be held at the 0.5-mile Martinsville circuit.

Assisted by back-marker traffic, Truex was able to close in on leading Penske duo Joey Logano and Brad Keselowsi, taking a lead he was not to lose on lap 370 and pulled away to take his first victory since his crushing win in the fall Martinsville race in 2019 by 4.7s over Ryan Blaney.

Blaney, who had been randomly drawn on pole position in his #12 Penske Ford Mustang struggled in the early stages of the race, dropping to a lap down due to excessive tyre wear - something which affected the whole field.

Having dropped to as low as 19th during the first stage, Blaney recovered to finish runner-up in the second segment and took the lead early in the final stage.

However, during a round of caution pitstops, he was penalised after a crew member jumped over the pitwall, sending Blaney to the rear of the field.

He then carved his way through the pack, and with 50 laps to go, was hustling team-mates Logano and Keselowski for second behind Truex.

Blaney passed the two to record a fifth top 10 result of the season, as Keselowski and stage one winner Logano made it a Penske 2-3-4. 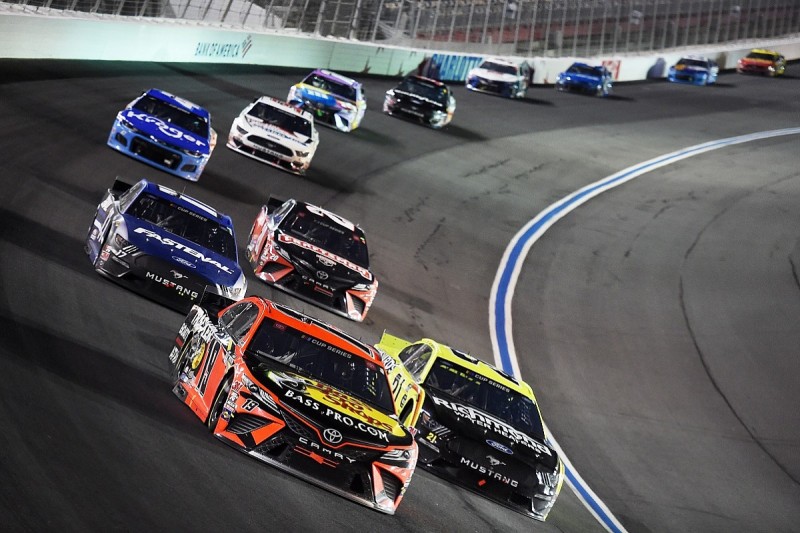 Jimmie Johnson, whose victory in stage two was just his third ever since NASCAR adopted the stage format in 2017, was 10th, having looked comfortable in the lead.

Wallace was able to take fifth and sixth in the first two stages, owing to clever strategy work from his pit-crew, but a later slow stop ruined his chances of improving on his 11th place finish.

All three Stewart-Haas Racing cars were hobbled throughout the race by battery issues, with Kevin Harvick, Clint Bowyer and Aric Almirola being forced to pit on occasion to rectify the problems.

The trio could only manage 15th, 17th and 33rd, respectively - all at least one lap down.

The #18 and #11 were able to recover from the early struggles which affected most of the field, and their misery was further compounded when Joey Gase did not pit under a caution, meaning they were not given the free pass and wave around - leaving them marooned in 19th and 24th, with team-mate Erik Jones, 20th.

Austin Dillon had to be helped from his #3 Richard Childress Racing machine late on after a panel on his car was bent which allowed hot fumes into the cockpit, overwhelming Dillon.

He was taken to the in-field medical centre and given oxygen but was released shortly afterwards.

NASCAR's Wallace should be "proud" of his activism against racial injustice