For the second consecutive week, the NASCAR Cup playoffs produced a surprise winner as Bubba Wallace held off Denny Hamlin to win at Kansas Speedway.

Wallace ran down Alex Bowman to take the lead for the first time in the race on lap 200 of 267 and remained out front after successfully navigating a round of green flag pitstops.

With 16 laps to go, Hamlin – who is co-owner of Wallace’s #45 23XI Racing team – got around Christopher Bell and began running down Wallace for the lead.

With no additional cautions to help, Wallace was able to hold off Hamlin by one second to earn his second career victory and first of the 2022 season.

It continues the run of none of the playoff contenders winning since the start of the title-deciding races, after Erik Jones took victory last time out at Darlington.

Bell, who took third at the finish, leads the overall points, ahead of William Byron and Hamlin.

Wallace, the only full-time black driver in the series, also replicated the win by his 23XI Racing team-mate, Kurt Busch, who won the Kansas race in the spring. Wallace is now driving Busch’s #45 while Busch continues to recover from the effects of a concussion.

The win by Wallace automatically advances the #45 team to the second round of the Cup owner’s playoffs, regardless of his performance next weekend at Bristol.

“Man, I’m just so proud of this team and the effort they put in each and every week,” Wallace said. “I’m just thankful for the opportunity, right? Took this jump from an idea two years ago from a text from Denny before it all even happened. He was ready to get the deal done. My pit crew was awesome today. We had one loose wheel. 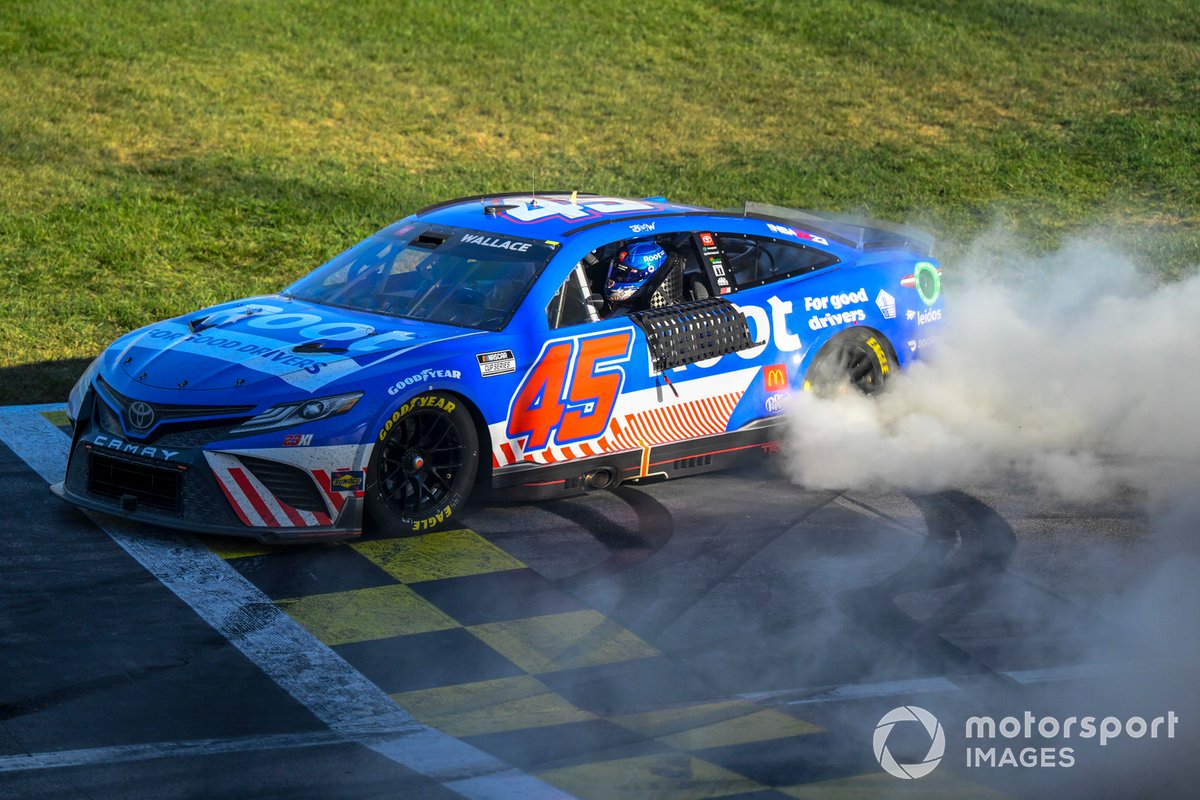 “I knew Denny was going to be strong. That's the things I look at, is he wasn’t that good at the beginning of the day, and he comes up and finishes P2. And that’s what I want to start doing. When we don’t have the best days, just capitalize on moments like that.

“It’s cool to beat the boss, but man, we were just lights out today once we got to the lead, and it was a lot of fun.”

Asked how he remained focused to through the final 96-lap green flag run, Wallace said, “Been doing this for a really long time. I haven’t won a race like that in a really long time, but just knowing getting excited is going to mess you up, so it was just cool, calm, and collected, and here we are.”

Behind the top three early leader Bowman had to settle for fourth and Martin Truex Jr rounded out the top five.

In another mixed up finishing order, Byron took sixth ahead of Ross Chastain and Kyle Larson, as Ryan Blaney and Daniel Suarez completed the top 10.

With one race remaining in the first round of the playoffs, the four drivers most in danger of not advancing to Round 2 are Kyle Busch, Austin Dillon, Chase Briscoe and Kevin Harvick.