Some Chevrolet NASCAR Cup Series teams are using the debut of the new Camaro as an excuse for poor performance this season, according to Kyle Larson

Larson's #42 Chip Ganassi Racing squad has been the most consistent performing Chevrolet team so far this year, despite not winning a race.

Larson has three runner-up finishes and led the most laps at both Bristol and Kansas. He is currently ninth in the series standings.

"I have never felt like Chevys have been at a disadvantage this year," said Larson.

"Our team has been pretty solid every race. I think some of the teams maybe just use it as an excuse, where we don't do that.

"Honestly, I think maybe we are kind of where we were at last year, just other [non-Chevrolet] teams are a little bit better."

Austin Dillon is the only Chevrolet driver to win so far in 2018, at the season-opening Daytona 500.

Aside from Larson, the remainder of the Chevrolet teams have had difficulty contending for wins on the type of tracks that make up the majority of the Cup season.

Last weekend at Pocono, Larson was in contention for the win at the end of the race with Kevin Harvick, Kyle Busch and Martin Truex Jr - the three drivers with multiple victories this season.

"We are making our cars better every week. The guys in the shop are really excited about every car that we have been bringing to the racetrack because there are little things that have made them better," Larson said.

"We've just got to get probably some more downforce and overall performance and at least the #42 team will be right there competing for wins every week."

Chevrolet continued to struggle in qualifying for this weekend's Michigan round on Friday.

Its sole contender in the pole shootout was Richard Childress Racing's Ryan Newman, who ended up only 11th of the 12 cars to reach the final part of qualifying. 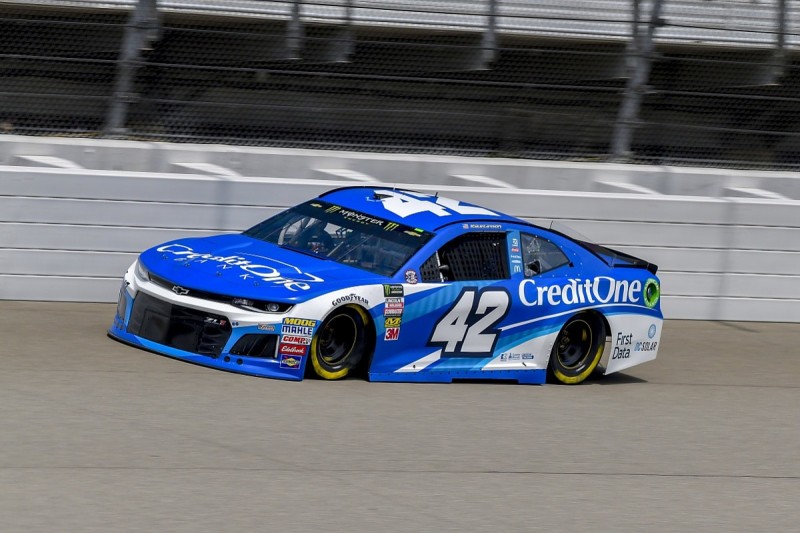 Larson, winner of the last three Cup races at Michigan, was eliminated in the first round and will start 26th - his lowest grid position since the Daytona 500.

"Our car has been pretty far off all day, just really tight," he admitted. "I couldn't even turn the wheel pretty far. I don't know what that is.

"We've got some smart people on our team that will figure it out and make it better for [final] practice."

Ford filled five of the top six places on the grid, led by Stewart-Haas's Kurt Busch on pole.

His brother Kyle's Joe Gibbs entry was the Toyota interloper in third behind Brad Keselowski.