Larson had previously been beaten by Busch three times at Bristol in the feeder Xfinity Series between 2013 and '15.

His latest defeat came in the top-tier Cup series after Busch forced his way past in a 'bump-and-run' move with just six laps remaining, with a late caution compromising Larson's final stint.

Larson has made a habit of missing out on victories at Bristol, with Monday's rain-delayed event the fifth time in nine races that he has finished inside the top 10 at the circuit without winning.

"The #42 Camaro ZL1 was really, really good on that long run," said Larson.

"And yeah, as soon as we restarted there [following a late caution caused by Brad Keselowski], I was extremely loose.

"The #17 [Ricky Stenhouse Jr] got to my inside. I just really didn't have any grip. I thought it would tighten up for me and I could get going, but it never really did and I was just really loose.

"I hate that I didn't win. It's another one at Bristol. I feel like every time I race here I almost get a win.

"I've been beaten by Kyle about every time I race here, too; so that gets frustrating after a while."

Larson added that it was clear he would not be able to recover from Busch's pass, because there were only 29 out of 39 cars on the track and not enough lapped drivers to slow his rival down.

"I knew it would be hard to get back to him," he said. "I knew I would need a lapper to kind of hold him up on exit and kill his momentum to allow me to maybe get back to his bumper, but there just weren't a whole lot of cars left out there."

Busch admitted that his move to pass Larson was a risky one to make and that he would not have been able to win without Keselowski's puncture that caused the final caution. 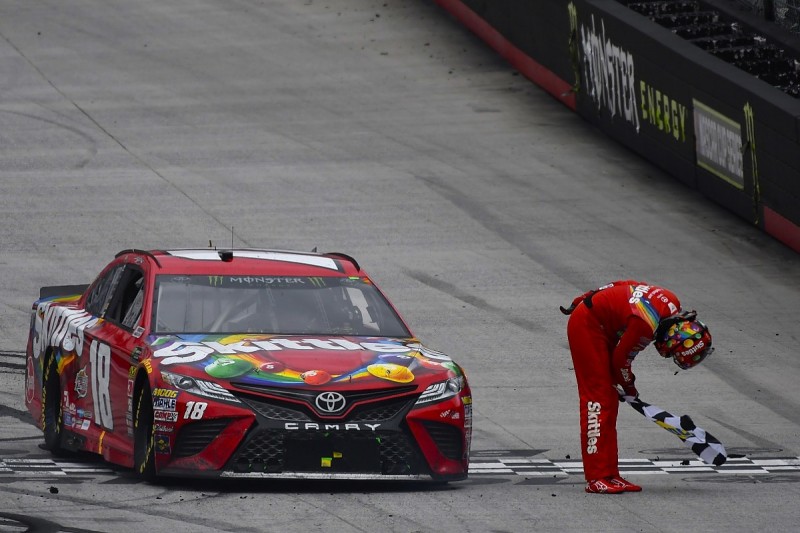 "It looked like he [Larson] was kind of battling it there for a little bit," he said.

"The #17 [Stenhouse] kind of got to him first, and then I got to the #17 and was able to get by him and then get back up and catch Larson again.

"He slipped up a few times and was able to give me that opportunity to get there, and we made the most of it.

"When it comes down to the end, it's crunch time, you've got to go.

"I wasn't sure if I made my move too soon. I thought so.

"But our car was fast enough that Larson never had a shot to get back to us to repay the favour.

"But as good as we were, Larson was just as good, so he was right there all day."