In the first NASCAR race to finish under lights at the track, Busch finished second in both opening stages as Brad Keselowski emerged in front, looking to sweep both Martinsville races this season.

Elliott took the lead for the first time on lap 386 of the 500-lap race, and dominated the final stage, with his car looking to be the class of the field in the final segment after running in the top 10 for much of the race to that point.

After dropping back in traffic, Elliott regained the lead with 30 to go, and battled hard with Keselowski to keep in front. Ultimately, Elliott and Keselowski's battle ended when the Penske driver was forced wide with four laps to go.

That left the door open for Hamlin, who was battling back from a pitlane speeding penalty, to move up to second.

As the field entered Turn 4 on lap 498, Hamlin made contact with Elliott, spinning the Hendrick driver and forcing the race to go to overtime.

Only one overtime period was needed, and although Joe Gibbs Racing team-mates Hamlin and Busch made contact several times during the final two laps, Busch was able to hold on to take the overall victory.

The contact between the Toyota pair came off worse for Hamlin who spun, starting a chain reaction that caused a pile-up as the field crossed the line to take the chequered flag. 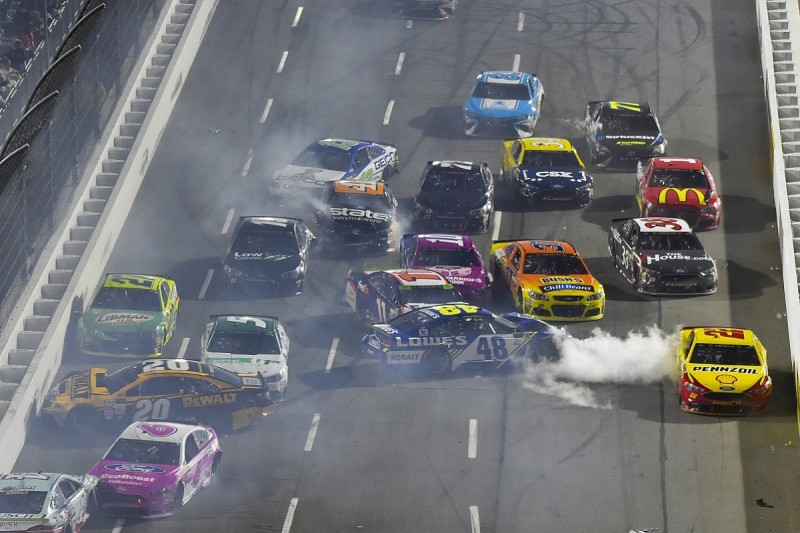 Martin Truex Jr squeezed his way through to take second place, and Clint Bowyer, another driver who didn't lead a lap finished third after emerging as an unlikely challenger for victory in the closing stages.

Keselowski made the most of the final lap action to recover to fourth, one spot ahead of fellow playoff contender Kevin Harvick.

Despite starting at the rear of the field due to a spin in qualifying, Jimmie Johnson finished in 12th. The nine-time Martinsville winner led 24 laps and gambled by pitting during a late caution period while the leading cars all remained on track, a risk that was unable to put him back in race-winning contention.

The late caution was a result of a spin for polesitter Joey Logano, who lost a tyre with just nine laps to go while battling in the top three. He was classified 24th.

After his collision with Hamlin, Elliott was marked down in 27th place. Following the chequered flag the pair had a coming together on track, followed by a heated exchange. Hamlin later admitted fault for the incident.

The complexion of the playoff picture changed dramatically over the course of the race.

Truex remains first in the points standings, but second-placed Busch is so far the only driver guaranteed to be in the final four by virtue of his win.

Keselowski and Harvick currently lock up the other two transfer spots, with Johnson just three points behind Harvick in fifth. Ryan Blaney currently occupies sixth, a further three points back from Johnson, while Hamlin is in seventh.

Elliott now lies eighth in the points with only two more races to get himself into the top four for the championship-deciding race at Homestead.