With a shifter stuck in fourth gear and a car quickly running out of fuel, Kyle Busch survived to win Sunday’s NASCAR Cup Series race at Pocono Raceway.

At one point in the race, Busch was dejected and ready to call it a day but he and his #18 Joe Gibbs Racing persevered, emplyoing a fuel-mileage strategy that ultimately provided him his second win of the 2021 season.

“Yeah, stuck in fourth gear. About out of gas. Just saving, just riding, playing the strategy the best we could with what was given to us,” Busch said of his race.

“Just can’t say enough about everybody on my team, everybody at Joe Gibbs Racing, Toyota, TRD, all the work they’re putting in.

"Even though we were in the back and behind and having to come through and persevere through being stuck in fourth gear, no clutch, all that stuff. It’s all burned out. Nothing left.

“It was awesome today. Feels good.”

Busch had earlier picked up the lead in the middle of Stage 2 but, on making his pitstop on the 74th lap, his transmission was stuck in fourth gear and struggled to get going again.

Another stop gave one of Busch's crew members the chance to try and fix it, but to no avail - leaving the two-time Cup champion stuck in gear for the rest of the race. 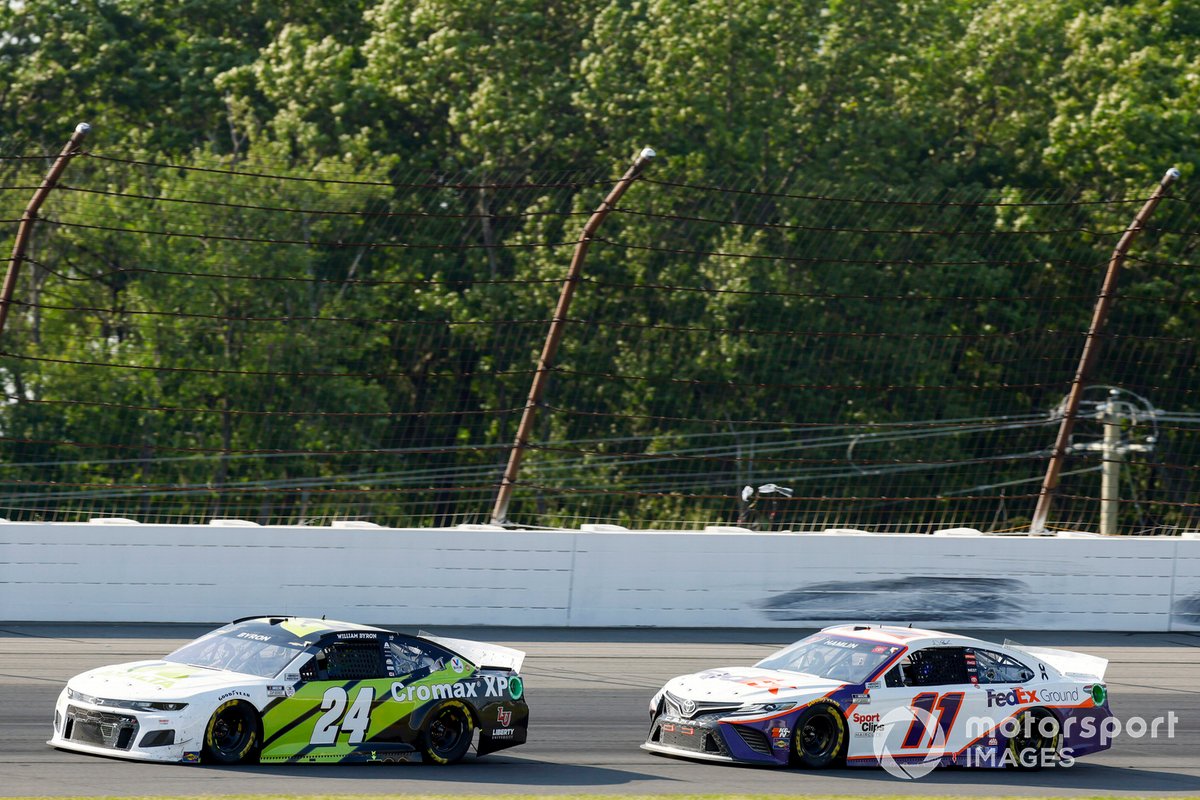 With five of 140 laps remaining, William Byron was leading, Denny Hamlin was second and Busch third – but all close on fuel.

With two laps remaining, the picture began to change dramatically as first Byron was forced to pit for fuel and Hamlin had to do the same with just over one lap remaining.

Kyle Busch inherited the lead and was able to coast to the checkered flag with a more than 8-second lead over Kyle Larson.

“I don’t even know how we ended up second,” said Larson, who started from the rear of the field because of using a backup car. “I was pretty slow after (running into Hamlin early in the race) then are team clicked.

“We were able to stretch it out until the end. Great effort by our team.”

Brad Keselowski, who made a late stop for a splash of fuel, ended up third, Kevin Harvick was fourth and Bubba Wallace finished fifth – his first top-10 of the season.

Byron swept to victory in the second stage, after capitalising on a number of green-flag pitstops, while Martin Truex Jr crossed the line first at the end of the first stage.