The Stewart-Haas Ford driver hit the front as both polesitter Chase Elliott and then Kyle Larson ran out of fuel while leading during the final two laps.

Busch kept out of the many incidents that took place in the middle part of the race and worked his way back up the field having dropped to the rear early on due to a pitlane speeding penalty.

The race, which was split into two stages of 60 laps and a third 80 lap stage under the new rules, had numerous cautions occurring late in the second stage and early in the third stage.

As the third stage was 80 laps long, a number of teams wrongly calculated how much fuel was needed to finish amid all the yellows, leading to Elliott and Larson's late heartbreaks.

Before the late drama it was Kevin Harvick, runner up in the first stage behind Kyle Busch and winner of the second stage, who looked most comfortable going into stage three.

But Harvick was among a number of major contenders taken out of contention in a 16-car crash early in the third stage, along with reigning champion Jimmie Johnson and last year's 500 winner Hamlin. 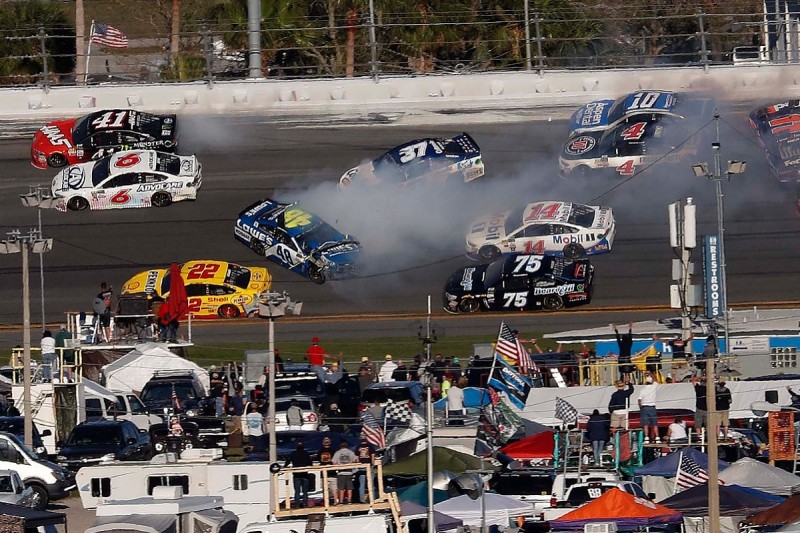 Elliott then looked the most likely winner as the sun went down, before the fuel issues left him 14th and Larson 12th.

Underdogs Ryan Blaney of Wood Brothers, who was lucky to escape damage in an earlier crash, and AJ Allmendinger of JTG Daugherty came through to second and third, followed by Aric Almirola and Paul Menard.

Penske protege Blaney fared better than the team's own drivers, with Joey Logano squeezed back to sixth in the final laps and Brad Keselowski another crash victim.

Having looked dominant on pace for much of the week, Toyota's only top-10 finisher was Michael Waltrip in eighth in his farewell race. The rapid Joe Gibbs Racing drivers were all caught up in accidents and Furniture Row's Martin Truex Jr was yet another to run out of fuel.