Logano is 15th in the Cup standings, but four drivers beneath him have qualified for a spot in the 16-person title shootout by virtue of race victories.

Though Logano won at Richmond, it was declared an 'encumbered' victory due to a rules violation so he cannot count it towards a playoff place.

He is too far behind Chase Elliott, Matt Kenseth and Jamie McMurray - the three win-less drivers in the playoffs via their points score - to overhaul them this weekend so his only hope is to win this weekend.

"We are in a do-or-die situation," Logano said.

"Anytime you can win a race in that situation, there is no better feeling than that.

"Also returning here after our win in the spring and obviously the drama that followed, it would be very nice to be able to get back in Victory Lane and prove a point.

NASCAR ruled that the rear suspension on Logano's Ford contravened the regulations when he won at Richmond earlier in the year.

Denny Hamlin's victory at Darlington last weekend was also ruled 'encumbered' for a suspension irregularity, but he was able to count his New Hampshire win from July towards the playoffs.

NASCAR's system of allowing race wins to stand when rules are breached has been debated this week. 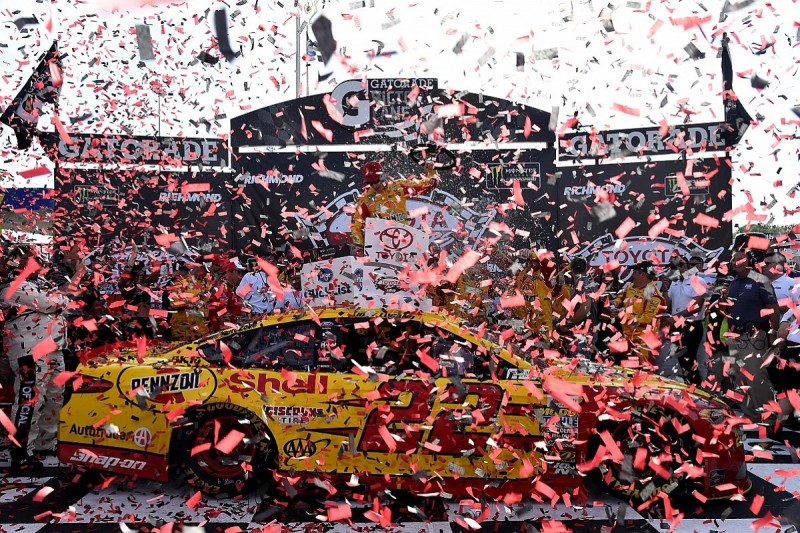 Logano thinks there should be a greater deterrent but is against victories being taken away.

"The fans came to the race to watch the race and they should see a winner after the race," Logano said.

"How else are we supposed to do it? Do you want to end the race and then wait three hours and let them tear down the car completely and then we go to Victory Lane and celebrate?

"That isn't exciting. Everyone would be gone. There would be no stories. You can't do it that way.

"But we also need to have a fair race. We need to make sure we tear these cars apart and find what is right or wrong about the cars.

"I will say that the penalties handed out with these encumbered finishes have been really small.

"To me they don't really affect the race itself. It is not like it has been a huge deal."