Harvick was initially the leading driver of NASCAR's 'Big Three' during the regular season alongside 2017 champion Martin Truex Jr and Joe Gibbs Racing's Kyle Busch, as they combined to win 15 of the first 20 races of the campaign.

All three drivers have found success harder to come by in the fight to make the final four, although Harvick and Busch have now confirmed their places in the title shootout at Homestead.

Johnson was expected to be a contender in 2018 but the new Chevrolet Camaro and an organisational shake-up at his Hendrick team coincided with a dramatic downturn in form that ended with elimination from the playoffs in a race-deciding last-lap crash at Charlotte's Roval. He has not won a Cup race since June '17.

"Here is my reality check: Jimmie Johnson hasn't won a race this year, and isn't king of the mountain," Harvick said.

"When that type of stuff happens, you see scenarios like that, you have to be real with yourself to say that these are scenarios that you'd better enjoy because they probably won't last forever.

"We've been fortunate to have been in this position for the last five years. We've capitalised on a lot of race wins, a championship, put ourselves in position to win a few other championships [but it] just didn't all work out.

"You need to capitalise on every moment, on every fast car, on every chance you have to win a championship because at some point there's going to be some tougher times in there." 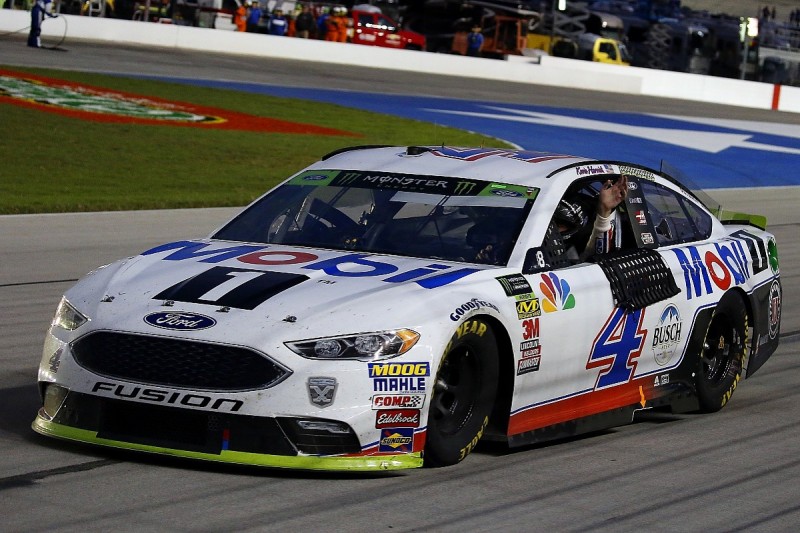 Harvick's Stewart-Haas Racing squad's emergence as NASCAR's leading team this year was unexpected as it ran with the oldest car on the grid in the Ford Fusion, which competes against the field-leading Toyota Camry and the new-for-2018 Camaro.

SHR believes its transition to Ford for the 2017 season after a lengthy association with Chevrolet was an initial setback.

That move meant it lost its support from Hendrick, which led to questions over SHR's approach.

But Harvick feels the team has now been fully vindicated with its 2018 form.

"The change to Ford, which everybody thought we were crazy [to do], the bottom line is we've got more resources and things we can keep within our own walls," he said.

"I don't believe we've reached the potential of where we can be, but you see the progress of things that have happened when you see how all four cars are running. That's not easy to do.

"It takes a lot of time, effort, detail, people and money to do that."

Harvick's three SHR team-mates Aric Almirola, Kurt Busch and Clint Bowyer are all still in title contention going into this weekend's Phoenix race, where the final 'championship four' will be set.

Almirola hints he will retaliate after Logano NASCAR Texas incident