Johnson entered the final race of the season with a 28-point advantage over Kenseth, whose challenge for the title suffered a setback after a disastrous outing at Phoenix last weekend.

Possessing a virtually insurmountable margin, Hendrick Chevrolet driver Johnson only had to finish in the top 23 in order to claim the 2013 championship, irrespective of Kenseth's performance.

Starting seventh, Johnson ran as high as second in the opening phase of the race before settling on fifth, where he ran solidly until things went awry on lap 193 of 267.

Following a restart for debris clean-up, Johnson found himself in the mix and had an encounter with Kenseth, which dropped him from eighth to 23rd.

Having only suffered body damage to the left front fender, Johnson began filtering his way through the field and - despite a further caution period interrupting his recovery drive - he eventually finished ninth to claim this year's title.

Hamlin took the chequered flag (pictured below), his first win of the season after dominating the second half of the race, having fended off both Kenseth and Dale Earnhardt Jr for much of the afternoon.

Kenseth led from pole and only lost his command of the race on lap 167 when Hamlin took his first turn at the front of the field. 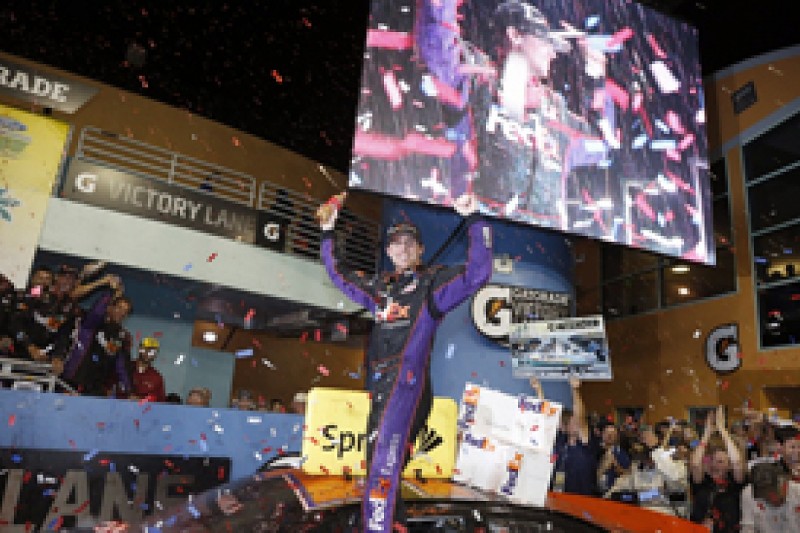 Earnhardt soon demoted Kenseth to third, but the Job Gibbs Racing driver finally reclaimed second with 20 laps remaining and held off his Hendrick Racing rival until the finish.

Kevin Harvick, who was mathematically still in with a shout of the title, claimed 10th after almost going a lap down at one point, but was saved when Danica Patrick caused a caution period on lap 116.

After 31 seasons, veteran Mark Martin signed off by claiming 19th position, behind IndyCar-bound Juan Pablo Montoya, who had made his Cup debut at Homestead in 2006.