Elliott gradually lost time while lapping backmarkers and opted to take the low line in traffic as Busch went to the outside and completed a risky pass to win.

"I'm just so disappointed in myself," Elliott said. "I couldn't have had it any easier.

"It ran green from the stage break all the way to the end. And, I gave it away.

"I appreciate my team and their efforts today. The pitstops were great and they kept us in the ballgame. I didn't.

"You look back and maybe you could have done some different — but I didn't. It's such a bummer.

"It's such a disappointment for my team. I really don't have a whole lot to add."

Race winner Busch said he was surprised by the tactics Elliott employed to hold on.

"The only thing Chase could have done differently was just move around and try to get out of the wake of the cars that were in front of him," he said.

"I was actually surprised he didn't. He kept running the bottom behind those guys, and the bottom was what got him there for that point in the day. 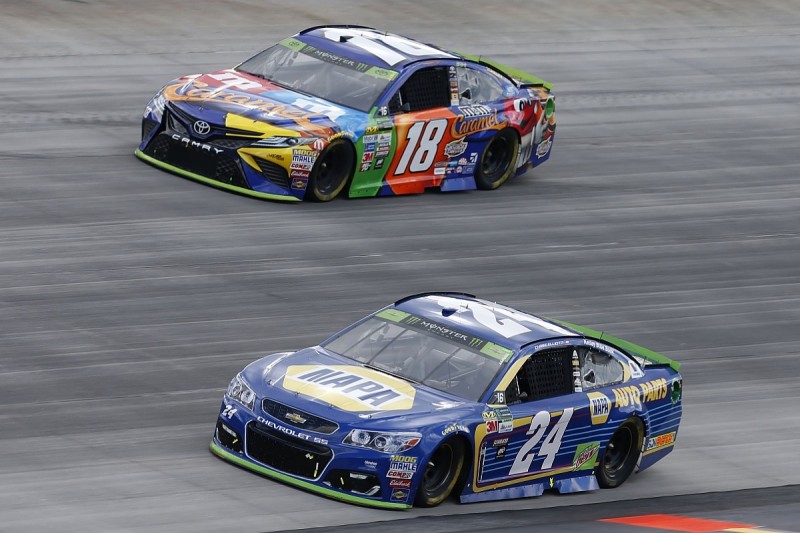 "He was good down there all day long, but he was just getting slowed down too much by the air and everything in front of him."

"The bottom usually prevails," he said. "I'm not sure, especially on a long run, the outside has really ever worked here.

"The two or three runs before the final one, Kyle was dedicated to it, and I was able to hold him back just running the bottom.

"So I think Chase weighed his options out and knew that the bottom is where 90% of these races have been won, if not more, and stuck with that.

"I think he had more trouble with the cars that were in front of him.

"There were cars fighting to stay on the lead lap that really hurt the performance of his car, and the #18 had a straightaway of clean air to chip away at the lead and get to him.

"I feel like lap traffic probably played a bigger role in it than anything."

Johnson added he felt the need to take Elliott to one side after the race.

"I knew I couldn't make him feel any better," said Johnson.

"I just know from my own experience it's just nice to kind of vent and get through that.

"Clearly, he didn't have much to say and he's pretty bummed out about the situation."