In the first duel Team Penske replicated its dominant form from last Sunday's Clash race, running 1-2-3 with Blaney sandwiched between Joey Logano and Brad Keselowski for the majority of the 60 laps.

With only a few laps remaining, Blaney made what would transpire to be the race-winning move, dipping to the inside line into Turn 1 and passing Logano moments before the third Penske Ford of Keselowski caused a late caution.

Clash winner Keselowski collided with the rapidly advancing Jamie McMurray on the back straight, having left the door open for the Chip Ganassi car to draw partly alongside him.

This caused Keselowski to turn himself into the wall, the ensuing damage forcing a switch to his back-up car for the Daytona 500.

Logano initially dropped to third during the final restart, but made a last-gasp draft pass around the outside of the final turn to steal second place away from Cup rookie Darrell Wallace Jr of Richard Petty Motorsports.

Fourth place went to a determined Ricky Stenhouse Jr, who spent more time than anyone else on the inside lane trying to start passing moves.

His overtaking attempts did contribute to two separate crashes, as the aerodynamic instability caused by his passing meant both William Byron and David Gilliland had separate spins into the wall moments after Stenhouse started to pull alongside them.

Kurt Busch made it four Fords in the top five, leading home Ryan Newman, David Ragan, the recovering Daniel Suarez and McMurray, with Chris Buescher rounding out the top 10.

Suarez had been delayed in an incident that took Jimmie Johnson out of a second race in a row. Following his late crash in the Clash race, Johnson punctured a tyre early in the first Duel. He speared into Aric Almirola after losing control at speed, with Suarez also spinning out to avoid the ensuing collision.

Daytona 500 and first Duel polesitter Alex Bowman took a safety-first approach, immediately waving the field by on the opening lap and sitting several seconds behind the lead pack throughout the race.

He finished 14th, second-to-last those still running, but will still start from pole on Sunday. 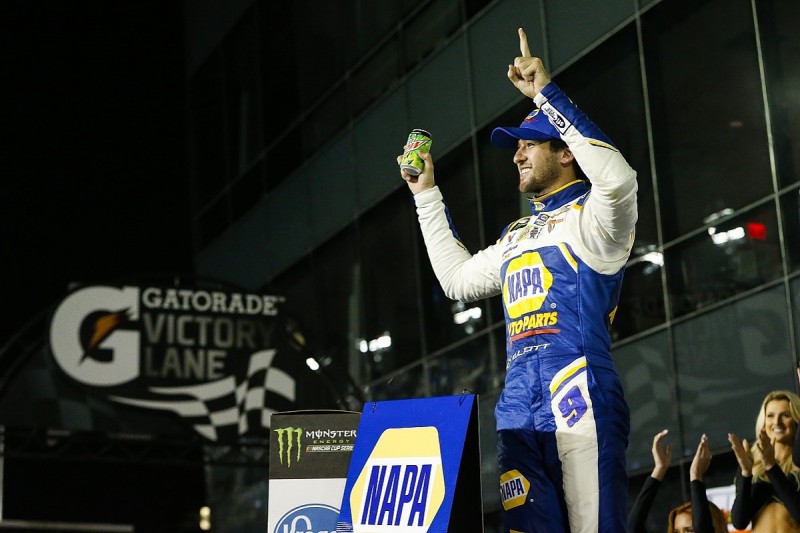 The only Hendrick Motorsports car in the second race, Elliott secured his second Duel victory in as many years, unusually helped by an early penalty for a pitstop infringement.

Electing to take four tyres during his second stop while the majority of drivers only topped up with fuel, he scythed through the pack and took the lead from Joe Gibbs' Denny Hamlin just before the halfway mark, sweeping down the inside at the first turn.

Hamlin found himself shuffled backwards on the outside during the final two laps and dropped to ninth by the end.

Kevin Harvick, who had led the race briefly after the first round of stops, finished in the runners-up spot to earn a fifth-place grid slot for the Daytona 500.

Erik Jones passed Clint Bowyer exiting the last corner on the final lap to take third. Jones's late move was the culmination of a long comeback drive, being involved in the second Duel's only caution period.

An early passing move by Elliott caused Jones's Joe Gibbs Toyota to become unsettled and spin, collecting Kyle Larson and Matt DiBenedetto - who were both forced to retire afterwards.

Despite seven cars failing to finish, all cars competing in the Duels will qualify for the Daytona 500, as only 40 cars entered the event.