The race was originally scheduled to begin at 3.18pm local time, but the 40-strong field was held on pit-road for an hour as a light rain shower passed over the 2.5-mile superspeedway track.

It was more than an hour before two-time winner Dale Earnhardt Jr dropped the green flag just at 4.23pm local time.

Ricky Stenhouse Jr, who took pole position on his debut in the #47 JTG Daugherty Racing Chevrolet Camaro, led the field away and held position at the head of the pack for the 20 laps of racing that were possible before the red flag was thrown for rain.

That ultimately led to the suspension of the race until 4pm local time on Monday (9pm UK time).

Stenhouse was relatively untroubled in the lead, chased by a five-strong charge of Ford runners, led by 2015 winner Joey Logano in the #22 Penske, after Stenhouse's fellow Camaro exponent Alex Bowman was unable to hold position for Hendrick Motorsports from the front row.

The Toyota runners, led by reigning Cup champion Kyle Busch and Joe Gibbs Racing team-mate Martin Truex Jr, elected to drop to the rear of the field, for strategic reasons, with 45 laps of stage one still to be completed.

It is the first time since 2012 that the race will run on a Monday, when Roush Fenway Racing's Matt Kenseth took his second 500 victory in the disrupted running of the event.

That race did not finish until early on the Tuesday morning, after further rain and a lengthy red-flag period caused by Juan Pablo Montoya hitting a vehicle drying the circuit (pictured below). 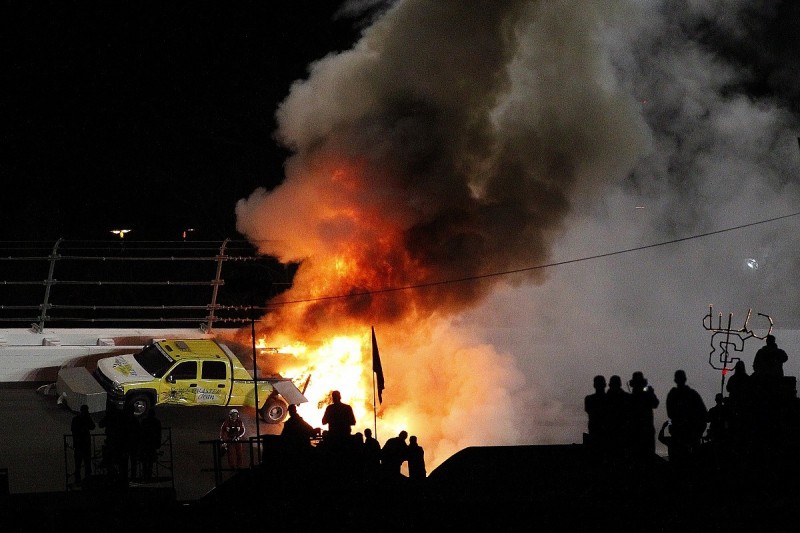