Rookie Chase Elliott looked set to take his first victory after leading for most of the second half of the race.

However, with four laps to go, a crash from Michael McDowell meant a late flurry of pitstops under the caution flag, where Truex took advantage and moved ahead of Elliott.

The caution took the race into Overtime, which allowed Truex to clear Ryan Blaney - who had not pitted - and take the chequered flag ahead of Joey Logano and Elliott.

Furniture Row Racing driver Truex was on a charge throughout the race, moving up from sixth on the grid to the lead by lap 22.

Though that dropped Truex a lap down, a blistering second half of the race with a strong effort by the pit crew set up his last-gasp victory.

Logano ran in the top 10 for much of the race and was elevated to the runner-up spot after a strong last stint.

Elliott was gradually climbing the order throughout and displayed great calmness under pressure but the Hendrick Motorsports driver was undone by the final round of pitstops.

Fellow rookie Blaney finished fourth overall after running consistently with those in the Chase before his good strategy call at the late caution thrust him into contention. 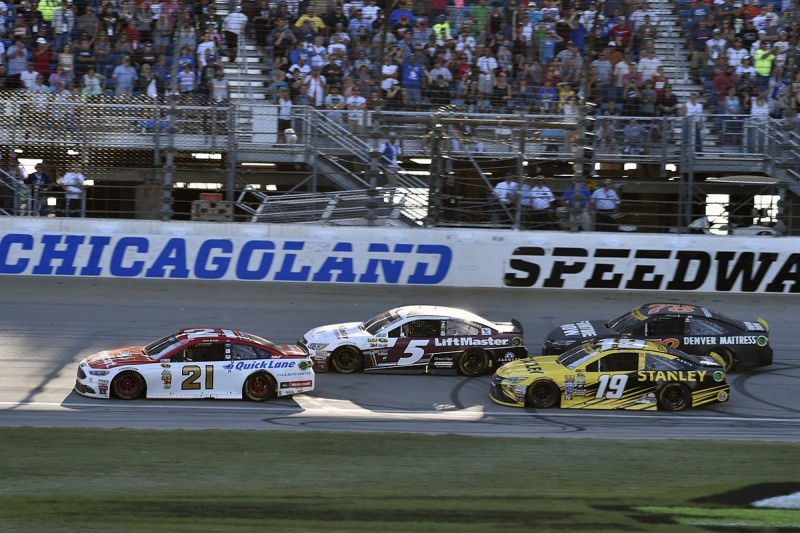 Brad Keselowski spent much of the race in the top three but couldn't keep pace with the Hendrick Motorsports cars.

He faded as the race approached the closing stages to finish fifth ahead of Denny Hamlin.

Polesitter and reigning champion Kyle Busch started well before falling down the order and ending up eighth after a pitlane speeding penalty.

Jimmie Johnson, the six time champion who has never missed the Chase since its introduction in 2004, was running first for much of the race after the first caution.

But he was passed by team-mate Elliott and later hit with a speeding penalty, leaving him 12th and meaning he has still never won at Chicagoland.

Kyle Larson, who was quickest in both of Saturday's practice sessions but started at the back due to a change of transmission, made a strong start and was up to fifth at one point but dropped to 18th after an extra pitstop.

Experienced Chase competitors Tony Stewart, Kurt Busch, Carl Edwards and Matt Kenseth never felt comfortable with their cars while Kevin Harvick had to start from the back of the grid for a bodywork modification and finished a lap down in 20th despite a charge through the field.