Busch led Kevin Harvick, Martin Truex Jr and Larson with 42 laps to go when racing resumed after the fifth caution.

Chip Ganassi Racing man Larson quickly disposed of Furniture Row Racing's Truex and Stewart-Haas driver Harvick to set up a shootout for the win between himself and long-time leader Busch.

As the leading duo encountered stubborn backmarker traffic in the closing stages, Larson pounced and grabbed the lead on the final lap but slid into Busch's car as he did so - pitching the two into the outside barrier.

Both were able to continue, but further contact led to Larson slewing onto the infield, leaving Busch clear to take the 48th Cup win of his career, with Larson catching his slide (pictured) to salvage second ahead of Harvick. 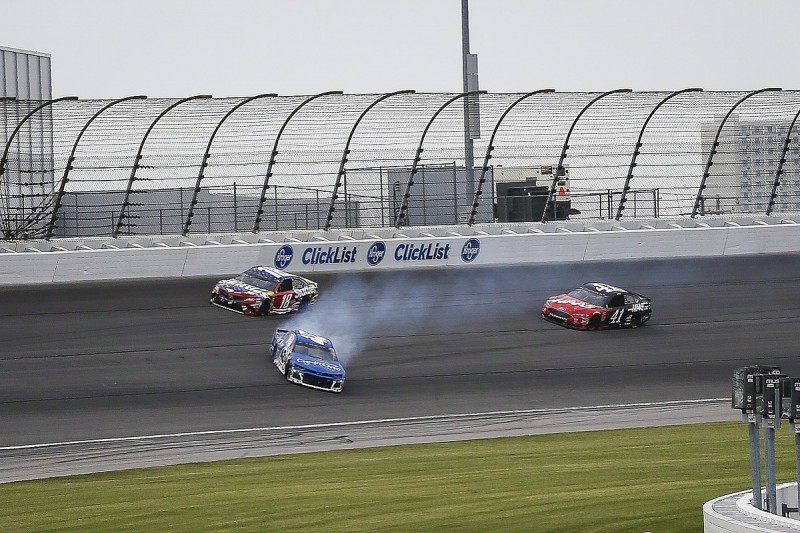 Busch had risen through the field from 16th on the grid, although he radioed in that he was suffering with problems following other cars mid-way through stage two.

He was still able to make his way through the top 10 to run second by the time Corey Lajoie hit the Turn 2 wall, bringing out the caution flag.

Quick pit work led to Busch winning the race off pitroad, and taking a lead that he would only relinquish for the few seconds Larson got ahead.

Harvick, who won stage two after a last corner pass on team-mate Kurt Busch, led 39 laps but was unable to either pass Kyle Busch or defend from the charging Larson.

He fended off Truex, who came from near the back to fourth.

The 2017 champion had started in 36th place after his car failed the post-qualifying inspection. He quickly scythed through the field, and was in the top 10 by the end of the first 80-lap stage.

Although he had strong pace, Truex did not lead a lap - the only driver in the top five to not do so.

Clint Bowyer had a fine recovery drive after he was penalised twice for speeding in the pitlane.

Leading after the first stop cycle around lap 35, the #14 was issued with a drivethrough penalty, but after speeding again while serving the penalty he was forced to pit for a stop/go.

Bizarrely, he failed to stop for a sufficient period of time, and came into the pits for a third time to serve the penalty. He dropped to the rear of the field, three laps down.

Helped by caution periods, the Stewart-Haas Racing man fought his way back up to take fifth at the flag.

Long-time leader Aric Almirola dropped out of on contention for the win after suffering a loose wheel, just after the second green flag stops, approaching half-distance.

Despite his best efforts, the Stewart-Haas Racing driver was unable to recover from the unscheduled stop and came home in 25th, although he did lead a race high 70 laps.

Polesitter Paul Menard was jumped by Ryan Blaney at the start of the race, and his afternoon did not get any better.

The Wood Brothers Racing driver was also slapped with a speeding penalty, finishing just ahead of seven-time champion Jimmie Johnson in 13th place.

Erik Jones and Denny Hamlin, who survived a late race spin, took sixth and seventh for Joe Gibbs Racing - Hamlin also coming from the back of the grid.

Team Penske team-mates Joey Logano and Brad Keselowski were eighth and ninth, with Alex Bowman of Hendrick Motorsports rounding out the top 10.