Kyle Larson survived a lost alternator belt to remain in contention before charging to victory in a chaotic NASCAR Cup playoff race at the Charlotte Roval.

Larson first noticed an electrical problem on his car early in Stage 2 and when he pitted under caution on lap 34, his team discovered he had lost an alternator belt.

Changing the battery provided a quick fix but the team formulated a plan to change the belt under additional stops. Once the work was complete, Larson’s car was as fast as ever.

He got inside leader Denny Hamlin off Turn 4, following the final restart on lap 102, and led the final eight laps to hold off Tyler Reddick by 0.782 seconds.

The win is Larson’s seventh of the 2021 season, the most of any driver so far this season, and has given him a big points advantage heading into the semi-final round of the NASCAR Cup playoff, which starts next Sunday at Texas Motor Speedway.

“I did not see us winning,” Larson said following an enormous burnout after winning. “I didn’t really feel that good early. We started to change some things and the team did a good job of letting me know what to do inside the cockpit to do better.

“Around that time, I noticed my battery was getting low and I was like, ‘Man, I’m not going to get knocked out of the playoffs like this?’ It wasn’t looking too good. Thankfully, everybody on our #5 car did a good job of staying calm.

“Cliff [Daniels, Larson's crew chief] did a great job of communicating with me on what was going on like getting the battery changed and whatever else it took. William was also good and it was a bummer not to see it work out for him.

“This is an awesome day for Hendrick Motorsports.” 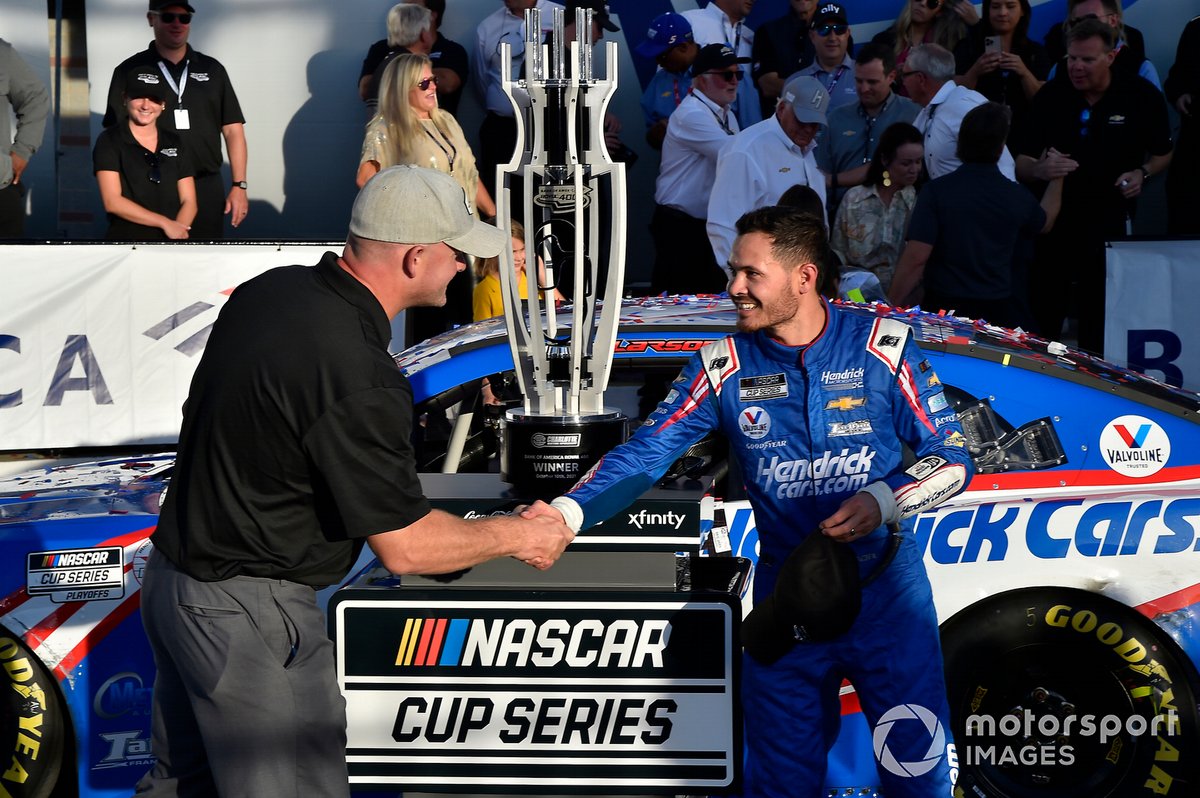 Chris Buescher finished third in the race, Kyle Busch was fourth and Hamlin rounded out the top-five in a hectic end to the race.

The action erupted on lap 55, when Harvick punted Elliott into the Turn 7 wall. His #9 Hendrick Motorsports Chevrolet required extensive repairs, but he managed to remain on the lead lap.

The race returned to green on lap 58 with Byron still leading from Austin Dillon and Hamlin, only for Hamlin to later miss the backstretch chicane on lap 70. The Joe Gibbs Toyota driver was forced to serve a stop-and-go penalty, which dropped from third to sixth.

Larson, Bell and Michael McDowell were among the first cars to make a green-flag pit stop on lap 74.

With 24 laps to go, a piece of Elliott’s rear bumper cover was dangling behind the car. It finally fell off and onto the track, prompting NASCAR to throw a caution on lap 87.

Most of the lead-lap cars pitted under the caution, but Hamlin elected to stay out and led the way when the race resumed on lap 90.

Another caution came out just three laps later, when Corey LaJoie slammed the Turn 2 wall in an incident that also caught out sportscar ace Joey Hand on his NASCAR debut.

Following the restart, Harvick locked up his brakes entering Turn 1 on lap 99 and hit the wall hard, bringing an end to his race and playoff run.

The race returned to green on lap 102 with Hamlin still out front. He was followed by Larson, Reddick, Buescher and Logano - but couldn't hold off Larson, who hit the front for the first time in the race and was never headed thereafter.

Reddick moved to second ahead of Byron and Buescher, with Kyle Busch fourth and Hamlin on his old tyres dropping to fifth late on.