The Joe Gibbs man, who also won last year's event, ran in the top five for the majority of the race but never looked like a victory candidate as those ahead of him had greater pace.

Everything changed, however, when the ninth caution of the race came on lap 199 of 200 as Clint Bowyer spun out as a result of a blown tyre.

A quick four-tyre change helped propel Busch to the front of the field and he soon deposed brother Kurt and rookie Larson to claim the win.

Larson missed out on what would have been a first Cup victory by just 0.214s.

The latter ran at the sharp end of the field throughout the race, fighting with the likes of Brad Keselowski and Jimmie Johnson.

Keselowski led the opening phase of the race, but a gamble to stay out in the lead on lap 57 - on 14-lap old tyres - when Tony Stewart spun out down the backstretch failed miserably, and he soon dropped down the order.

The 2012 champion briefly returned to the front with 30 laps to go before suffering a blow out in the dying moments of the race. He eventually finished 26th and a lap down.

Johnson meanwhile led the most laps of anybody - a total of 104 - and looked set to claim his sixth Fontana win, but he too experienced a tyre deflation five laps from the end while leading. 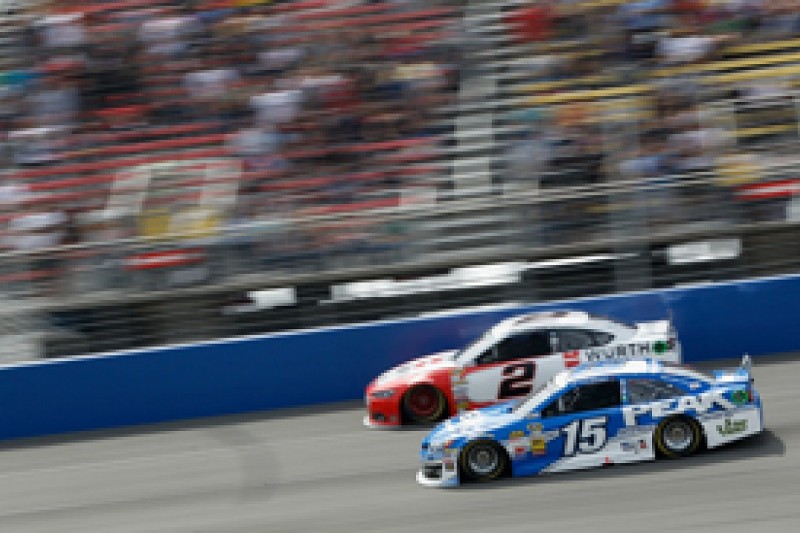 Jeff Gordon produced a great recovery drive from the back of the field and was a thorn in his Hendrick team-mate's side all day.

The 42-year-old suffered an early penalty for being too fast on pit road when he pitted on lap 19, dropping him from third to the rear of the field.

He fought back however and soon filtered his way to the front again, where he and Johnson traded places on numerous occasions - resulting in a record 35 lead changes at Fontana.

Gordon's charge fell apart though during the green-white-chequer finish as he dropped down the order to finish 13th.