Though Busch retains the points lead as the series approaches its playoffs phase, he has not won a race since the early June Pocono round and has had largely inconsistent results since then.

By contrast team-mate Denny Hamlin has been in the top three for the past five straight races, winning two of them, Martin Truex Jr was in the top four for the three races prior to last weekend's Bristol event and Erik Jones had a string of four top-four finishes across mid-July to early August.

At Bristol, where Busch had won three of the previous four Cup rounds, he qualified only 31st and was lapped early on before using a tyre gamble to briefly lead and salvage fourth.

But Hamlin recovered from two laps down to win the race and JGR affiliated team Leavine Family Racing took second with Matt DiBenedetto.

"It's better than some other situations, for sure," Busch said of his Bristol result.

"Adam [Stevens, crew chief] and the guys do a really good job of being able to work on the car and constantly improve it and constantly make it better. 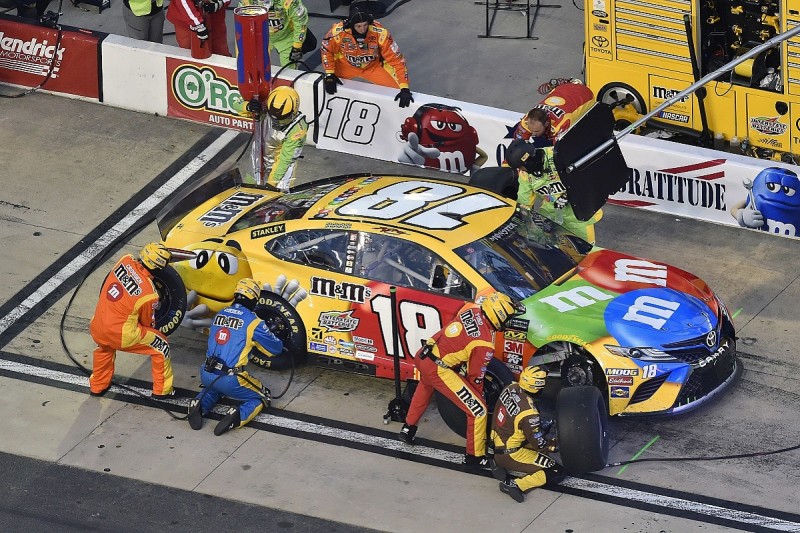 "But [we're] flat out getting our ass kicked right now by our team-mates, so we've got to get better."

Despite his car being "too loose" late in the race, Busch did manage to catch and pass Chase Elliott for fourth in the closing stages.

He came within striking distance of third-placed Brad Keselowski with five laps to go but was unable to make a pass.

"I just never really found what I was looking for. We were kind of all over the place.

"Early on, we were so loose that I was just barely hanging on and trying to make up time there.

"We finally got it tightened up enough there when I was racing with [Keselowski] and got the lead before that caution came out.

"Then we tried to make it a little bit better for exit after that because we were going to go a long way on tyres we figured and just made it too loose.

"I just had no rear traction getting into the corner."

The Cup Series has two more races to go before the championship is reset for what begins as a 16-driver shootout for the title.