Chip Ganassi Racing Chevrolet driver Larson caught Busch's leading Joe Gibbs Toyota in traffic in the closing stages and dived past, only to slide and tap Busch as he tried to complete the move.

That sent Busch into the outside wall, but he lost little momentum and then pushed Larson into a slide that sent him onto the infield grass.

Busch recovered from another brush with the wall to win despite a punctured tyre, while Larson regained control in time to still finish second.

"If it wasn't for lapped traffic, it wouldn't even have been a race, so I don't know what you all are whining about," said Busch as he received both cheers and boos from the crowd during his post-race interviews.

"But if you don't like that kind of racing, don't even watch."

He then made a 'crying' gesture into the television cameras before blowing a kiss to the grandstands.

Larson made it clear he had no problem with Busch's driving.

"I had an opportunity there to slide in front of him and I figured I wouldn't clear him or I would allow him to drive back underneath me," Larson said.

"So, I tried to get to his door and I opened the door for him to retaliate into [Turn] 3.

"I thought it was free game. I ran into him first, he got me after that, maybe a little bit worse than I got him, but that is alright.

"I love racing Kyle. I know all these fans are probably mad at him, but hey we put on a hell of a show for you guys and that was a blast. 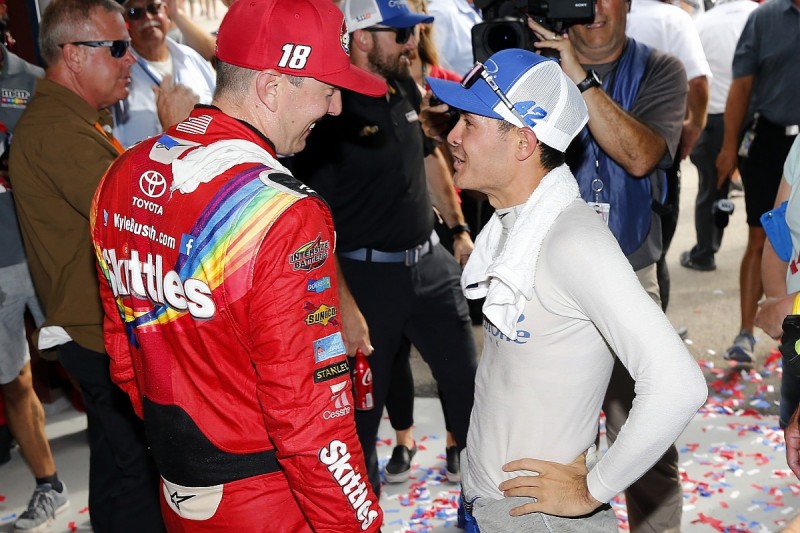 Busch acknowledged that the spectacular finish was good news for NASCAR, amid a season that has been short on action at times, and that Larson might eventually retaliate.

"I'd much rather not would've had to slam past him in order to win the thing," Busch said.

"When I was going down the backstretch, I was like, 'Hell, no, you're not taking this one away right now'.

"I was just going to do anything that it took for us to be able to get back to the start/finish line first.

"Was it an aggressive move? Absolutely.

"Was Larson's an aggressive move? Could he have got off the throttle sooner and not hit me into the wall off [Turn] 2? Absolutely. It goes both ways sometimes.

"I'm glad we were on the front end of it. I'm sure one of these days it will come back on me somehow. It's just the way it always evens out."