Brad Keselowski locked up and slid into the barrier at the corner nicknamed 'Heartburn Turn' while leading with six laps to go.

"We'd just been the longest we had been on tyres and I guess all of us are just stupid and don't know where to brake for the corner considering what our tyres looked like and so we just all drove off into a 90-degree wall for something to do because we had nothing else better to do," Busch said.

"We're just all in a restart zone trying to build as much speed as we can to go off into a corner that's really slick already and try to race through there two-wide on 20-lap old tyres."

Keselowski was also baffled by the incident.

"Maybe we all overdrove it. Maybe the track had something on it. I don't know," he said.

"I got in hard, but not like ridiculously hard and it just locked up. 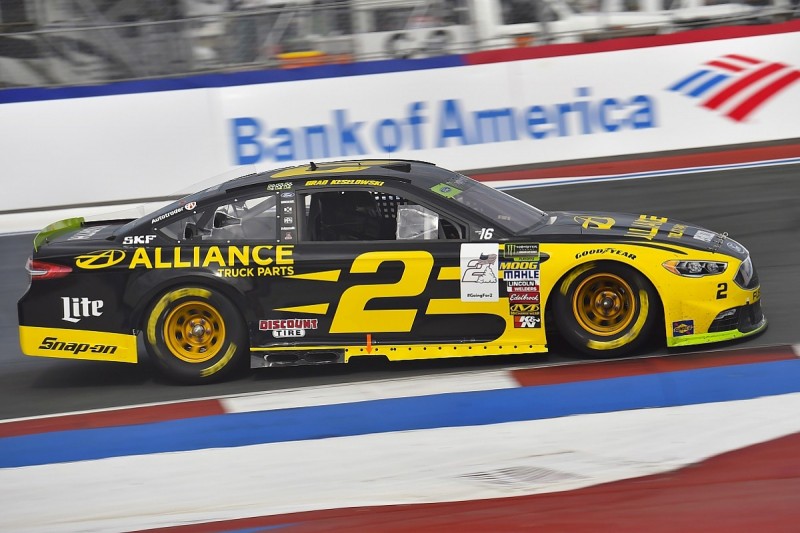 "I couldn't get the tyre to unlock, so I felt really, really dumb when I hit the wall and then I saw the replay and saw everybody kind of did the same thing."

Busch and Keselowski had already qualified for the next phase of the playoffs via their previous wins, but Larson - who had led much of the Charlotte race - only made it through in dramatic fashion at the finish.

Ganassi repaired Larson's Chevrolet as much as it could and sent him back out for the final three-lap dash to the finish, though he could only limp round in his wounded car.

It appeared that Almirola would finish high enough to bump Larson out of the playoffs, until race leaders Martin Truex Jr and Jimmie Johnson collided at the final corner and Jeffrey Earnhardt spun into the wall in a brush with Daniel Hemric.

Informed of the chaos ahead, Larson pushed hard but caused his right-front tyre to blow, bounced off multiple walls and scraped across the line in 25th.

Johnson spinning back to eighth and Almirola ending up only 19th meant they and Larson tied on points, with Johnson eliminated on countback.

"I knew I was screwed. And then they said they were all crashing and it had to have been 45 seconds by the time I got back over there," said Larson.

"We had a lot of right-front damage and we kind of knew the right front would blow if I ran hard.

"I ran hard through [oval Turns] 3 and 4 and blew a right front and got into the fence. "I could see the #96 [Earnhardt] and I knew I needed that point to get to the tiebreaker and hit the wall again.

"Thankfully, we got the tiebreaker."