In a session where hundreths were the difference between places, Hamlin clocked a best time of 14.878s in his Joe Gibbs Racing Toyota to secure the top spot.

The high line was the fastest, but it was also very dusty and numerous drivers lost valuable tenths as their cars got loose.

This created the unusual sight of drivers aborting their laps before crossing the line, turning around, driving the wrong way around the track before embarking on another qualifying effort.

The first to try this was Hamlin's Joe Gibbs Toyota team-mate Kyle Busch, who had already won the Truck race on Wednesday, and set pole for Friday night's Nationwide race.

But the tactic backfired and on his second attempt Busch lost the rear end of his Camry and slammed into the wall. He will start from the last row.

After damaging his car in final practice, Kurt Busch produced a great effort to take second for Furniture Row.

"It's been great to go into an old-school trash like we did today and come out with an outside pole," said Kurt.

Carl Edwards held pole for a while in his Roush Fenway Ford, but was bumped to third in the final reckoning.

"That was a really good lap," he said. "We were not that fast in practice, it felt like a very good lap. I'm really excited for the race." 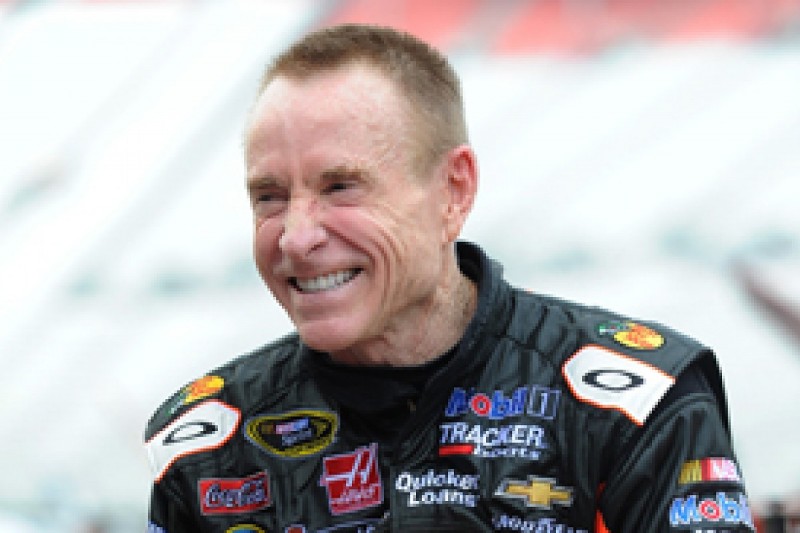 In his first race since being confirmed as a full-time 2014 driver for Michael Waltrip Racing, Brian Vickers did a solid job to take fourth, while Mark Martin (pictured), who he previously shared the drive with, set the 11th best time ahead of his debut race standing in for Tony Stewart at Stewart-Haas.

Like Kyle Busch, points leader Jimmie Johnson had two bites at setting a time, but he could do no better than 13th.

Ryan Truex will line up 18th for his Cup debut with Phoenix Racing. Mike Bliss was the only driver to fail to make the field.