The President of the United States, Donald Trump, is set to visit the NASCAR Daytona 500 on Sunday, the first president to do so since George W. Bush in 2004.

Trump (pictured above with 2017 Cup Series champion Martin Truex Jr) is expected to visit the NASCAR season-opener on the way back from a trip to his south Florida Mar-A-Lago resort.

A spokesperson for Daytona Beach International Airport confirmed to Autosport the airport was expecting a visit from Air Force One - the presidential Boeing 747 aircraft - on Sunday.

A 30-mile drone no-fly zone has also been put in place around the airport for Sunday.

Throughout his campaign for president in 2016 and during his presidency, Trump has shown an affinity for NASCAR and its fans and has invited champions including Truex and Joey Logano to visit the White House.

In early 2016, former NASCAR chairman and CEO Brian France appeared at a rally in Valdosta, Georgia, along with Trump, and drivers Chase Elliott, Ryan Newman and David Ragan and 1988 champion Bill Elliott.

"It's already over the top, off the charts, fun, exciting, and you're just rolling with whatever comes your way.

"They tell me it starts at a certain time, but you go when they tell you to put your helmet on.

"And I can't wait for President Trump to show up and for all of the race fans to acknowledge him and just to have that fun atmosphere of a president at the Daytona 500."

President George W. Bush attended the 2004 event (pictured below), which was won by Dale Earnhardt Jr. 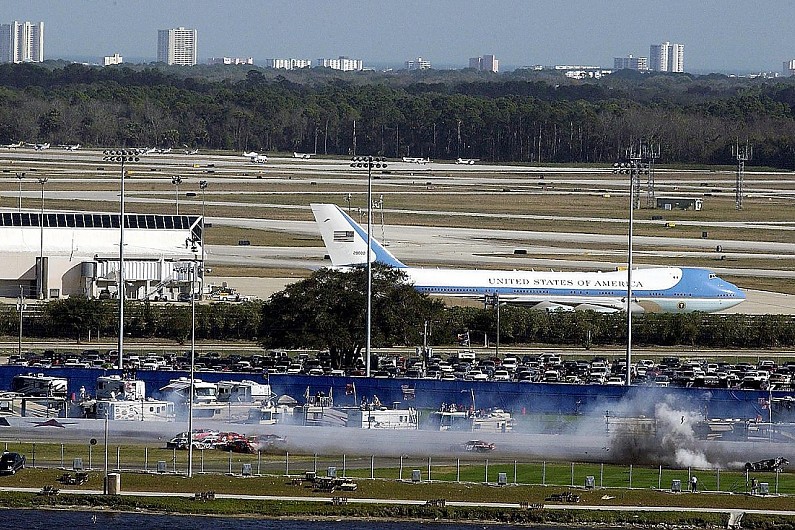