The 2021 season marks the Japanese manufacturer's 60th year in grand prix racing, having made its debut in the world championship back in 1961.

Yamaha has won 17 premier class riders' titles during its premier class tenure, beginning with Giacomo Agostini in 1975. Its most recent sucess came in 2015 courtesy of Jorge Lorenzo.

The current agreement between Dorna and the manufacturers comes to an end in 2021, with Yamaha the latest to agree a new deal - which is due to be official announced imminently.

It joins KTM, Ducati and Honda among the manufacturers that have signed the new five-year agreement, with Suzuki and Aprilia expected to sign up too.

"In terms of commitment to MotoGP, Yamaha is celebrating its 60th year in grand prix competition," Yamaha boss Lin Jarvis said during the marque's 2021 launch event.

"We've been in the game in 1961, which was just five or six years after the company was born.

"We're definitely committed to MotoGP, and I can tell you after this media conference there will be a press release confirming our commitment for the next period.

"Yamaha has signed the agreement with Dorna for 2022-26. So I'm very happy for that and that's a sign of our intention."

Last week Dorna announced it had agreed a new deal for five years with the International Race Teams' Association (IRTA), firming up its commitment to the grid's independent squads through to 2026.

Independent teams LCR and Gresini have already confirmed their commitment to MotoGP beyond 2021.

Yamaha currently supplies Petronas SRT with factory-supported machinery, with Jarvis confirming it will hold discussions with SRT and Rossi's VR46 team in the spring. 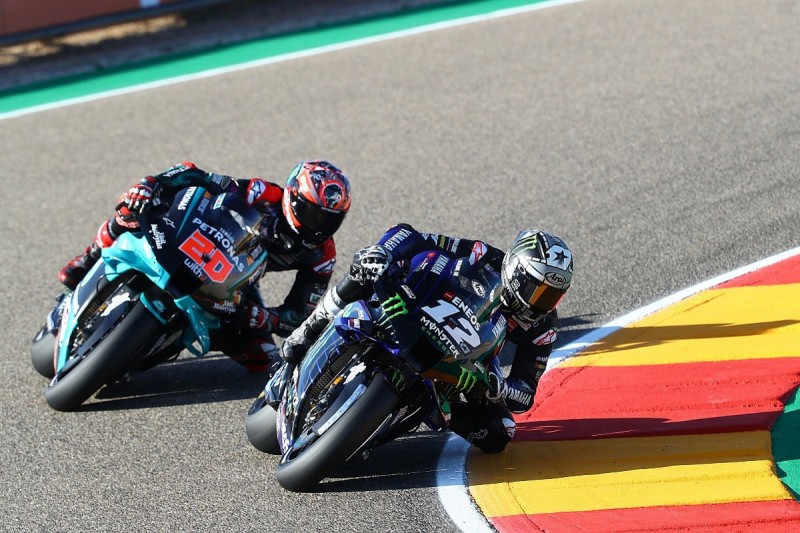 "We have a three-year agreement with the Petronas team, which expires at the end of this year," Jarvis added.

"And as you've seen from the press release last week with IRTA and Dorna, the independent teams have signed up for that period.

"This year will be a period of renegotiation with satellite teams in general and I believe it is not only Yamaha that will be in the middle of negotiations.

"In our situation, definitely the Petronas Yamaha team has done extremely well since we started with them.

"There's no question in their capabilities and capacity as a team. Will VR46 enter or not, that's the question.

"From what I understand they have an option which expires at some time, and I believe they are seriously considering to enter.

"We will continue to discuss the candidates that are available, and that I guess surely means Petronas and VR46 because of our long-term relationship with the company.

"Nothing has started yet, there are no negotiations on the table at the moment, but that will begin in April and May."