Valentino Rossi says he is worried about the threat from Ducati ahead of MotoGP's Czech Grand Prix at Brno, particularly his former Yamaha team-mate Jorge Lorenzo

Lorenzo has had a mixed start to life at Ducati this year, and sits ninth in the standings with just one podium finish to his name from the opening nine races of the season.

However, with Lorenzo sixth on the grid this weekend, and his team-mate Andrea Dovizioso at the head of the second row in fourth, front-row starter Rossi believes the Italian bikes will be a threat.

"I am worried about the Ducatis tomorrow," he said. "Dovi and Lorenzo are fast, maybe Jorge and bit more than Andrea.

"Here they are going strong. This year they are starting to use up the rear tyre a bit less, for this we will have to try and be careful and watch out for them.

"We have to be careful, because besides the Hondas [of Marc Marquez and Dani Pedrosa], Dovizioso, Lorenzo, Crutchlow and Vinales will all be quick tomorrow.

"Starting on the front row is very important because all the top seven can fight for the podium."

While Vinales - seventh on the grid - declared his "horrible" qualifying session as the worst he has had since joining Yamaha for this season, Rossi believes he will still be a threat because he "is always very strong in the second part of the race".

Lorenzo said he is feeling much more confident with the Ducati this weekend, which is giving him "very good feelings", in part due to the radical new aerodynamic fairing design he is running. 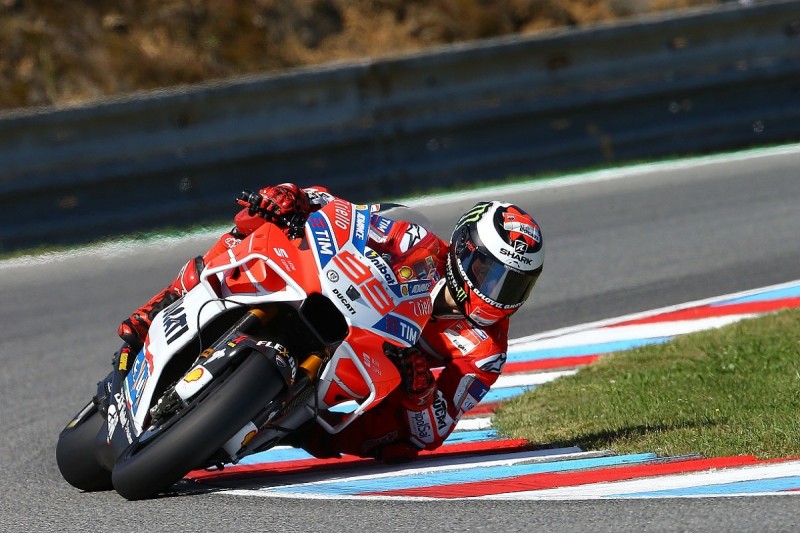 "Brno is a good track for me, and I feel really confident like in Barcelona," he said.

"And yes, the front [grip] and the feeling in most of the corners is a combination of things that make me have a better pace.

"The new fairing gives me more stability in most of the corners even if I am losing quite a bit on the straights.

"For me, this bike feels a bit more like in Valencia [for the 2016 post-season test], overall it is positive, it gives me more confidence."

Lorenzo added that he was so comfortable with the level of grip he has this weekend that he even feels confident about the prospect of a wet race, which has been a major weakness of his.

"Probably for one of the first times I'm optimistic in case of rain and I'm confident," he said.

"Yesterday [in FP1] I felt safe, fast and positive in the rain.

"If the race is wet, I would like to have the warm-up to try the new fairing in the rain, but if it doesn't happen, we are going to use the fairing.

"If it rains, we even have a chance to fight for victory."