Yamaha cannot think about winning the 2017 MotoGP world championship until it solves the problems it had in the Austrian Grand Prix, says Valentino Rossi

"It's not very smart to think about winning the championship when you're seventh," said Rossi.

"First you must try to be competitive.

"Zarco is happy because he beat me and Maverick, but if I finish fifth I am not happy.

"I did half the race with the Honda and the Ducati and the other half with the other two Yamahas [Vinales and Zarco].

"I saw were are much more in trouble in acceleration compared to others when the tyre drops.

"More than thinking about beating Zarco, we should think about fighting Honda and Ducati." 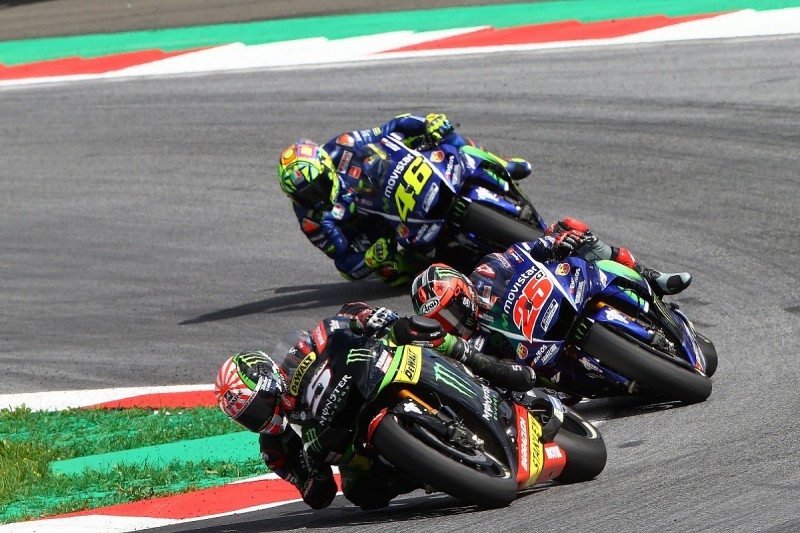 Vinales has suggested he is against Yamaha making further changes to its chassis, despite scoring only one podium since switching to the latest frame for Assen in June.

But Rossi was adamant new parts from Yamaha's Iwata base had to be the solution.

"We have to get help from Japan," he added.

"Honestly, if we had to do another race in one hour, I would not know what to change because we did everything to avoid this problem and we failed.

"So I don't think the solution is in the box."

Rossi hopes the more flowing layout of Silverstone and the likelihood of cooler temperatures will mean Yamaha fares better in the British Grand Prix at the end of August.

"In Brno I was fast, but I missed the opportunity to get on the podium because of the flag-to-flag [pitting error]," he said.

"Maybe Silverstone will be more like Brno and our bike will be fast."