A feud between the Yamaha and Honda riders defined the latter stages of the 2015 season, with Rossi believing that Marquez was working to help countryman Jorge Lorenzo win the title.

Rossi sparked the controversy on the eve of the Malaysian GP, and the pair then clashed in the race, with Rossi sent to the rear of the grid for the Valencia finale.

The pair fought for the victory at Barcelona in June, a Rossi-won battle followed by a then-rare handshake between them, and their tussle for third place was a highlight of Sunday's race at Silverstone.

When asked about the intensity of their battle and the way Marquez skipped part of the Maggotts sequence and rejoined in his same position behind him at one stage, Rossi brought up the Sepang comparison to emphasise he had no complaints.

"When you go out of the track, it means that you made a mistake," he said of the Maggotts incident.

"At the end it's not fair that you don't lose anything.

"But the rule is like this, if you go out of the track at a place that has the Tarmac and you don't gain an advantage, you can continue.

"So it's also like this for all of the other riders.

"Marquez is always very aggressive, but compared to the Sepang battle, this one was a lot different because both riders had the same target, to arrive in front and to try to go faster.

"This was the difference and I enjoyed it a lot."

Rossi, who also joked that he receives "special treatment" from Marquez, ultimately finished third while the Spaniard was fourth after running off-track at Stowe with two laps remaining as he fought Cal Crutchlow for second.

"To arrive on the podium after a race like this, after a battle like this was very fun," Rossi said.

"The only shame is that Maverick [Vinales] didn't wait for us, because we needed to have this fight for the victory.

"But except from that it was very fun." 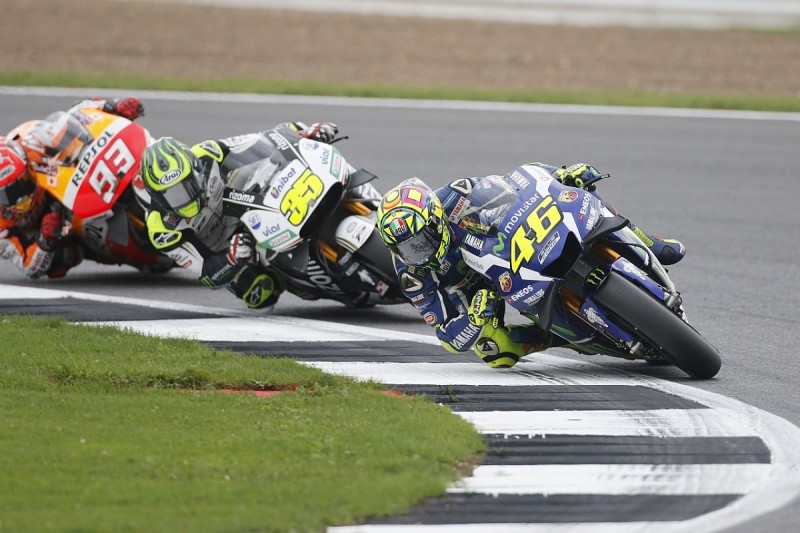 MARQUEZ NOT LOOKING BACK

Marquez leaves Silverstone leading Rossi in the championship by 50 points, with Lorenzo now 64 adrift after finishing a lowly eighth.

When asked whether he thought of Sepang while fighting Rossi, Marquez said: "No, I don't want to think on the past.

"I want to think on the future, because in this championship we are working really hard and I don't want to spend one second to think about the past."

He felt the risks he had taken at Silverstone were worthwhile even though he ended up with a slightly trimmed points lead.

"Maybe I attacked too much, I took too much risk but I believe I was able to finish second," said Marquez.