Valentino Rossi: MotoGP flag-to-flag are a weakness for me

Yamaha's Valentino Rossi has admitted he's not strong in MotoGP's flag-to-flag racing, after again being caught out in terms of timing for when to change bikes mid-race

Rossi was challenging for the lead of the Czech GP during the opening laps, but left his switch to the slicks-shod bike too late as he pitted on lap five.

He rejoined the track 12th after his stop and eventually recovered to fourth place, with the riders ahead of him - Honda duo Marc Marquez and Dani Pedrosa and Yamaha team-mate Maverick Vinales - having all made the switch earlier.

Speaking after the race, Rossi admitted he wasn't the best judge of when to swap bikes in flag' races with changeable weather conditions.

"It is not my stronger point, this type of racing, but at the end the result is not so bad," he said.

"In a full dry or full wet race, I can fight for the podium, but [it] remains a good weekend because we work well, and I feel good with the bike.

"We've improved a lot from the other flag-to-flag [races], and I think that before the end of my career we can defeat this flag-to-flag race."

Rossi was particularly happy to have improved on the result of last year's flag-to-flag race at the Sachsenring - in which he also left his bike swap late and could only finish eighth.

But while the timing of the stop in that race was his decision, as he delayed coming into the pits against the team's recommendations, this wasn't the case at Brno.

"Last year in Sachsenring they gave me the board [to pit] but I continue," he said. 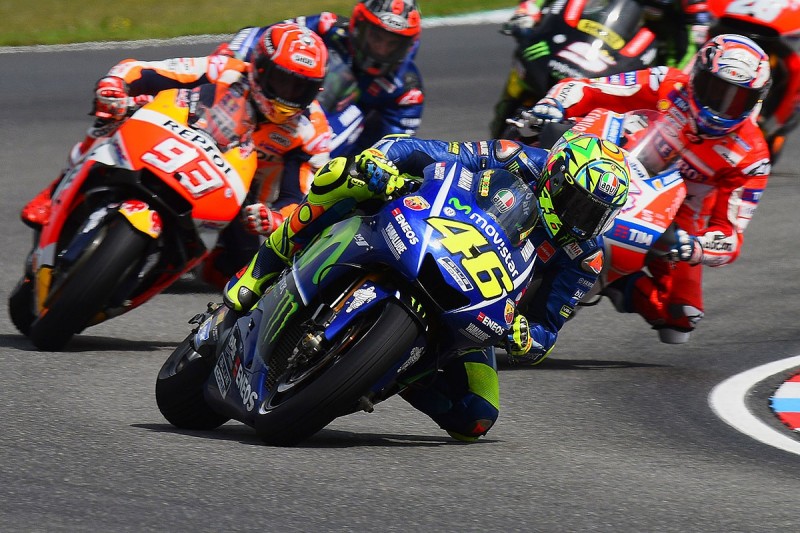 "This time I said: 'When I see the [pit] board, I come back, promise'. But unfortunately the board arrived a bit too late.

"Understanding the moment to come back [to change bikes] is not my strong point.

"I think I can come back one lap earlier, but I think that this time we are also a little bit unlucky."

Having joked that he was "happy" not to end up the only rider who had left his stop late, Rossi conceded Honda currently has the edge on flag-to-flag strategies.

"I think Pedrosa decided to come back [into the pits early] because they study a lot this type of situation, they are better than us," he said.

"Pedrosa decided to enter and 10 riders followed Pedrosa. I think that time we are also a little bit unlucky."

Rossi explained that he was caught out by how quickly the track dried - and said he was trying to build a "small advantage" in damp conditions because of Yamaha's lack of pace on the out-lap on slicks.

"Usually in the first lap with the slick, on the wet, we are a bit in trouble with the Yamaha," he said.

"So I try to push as much as possible on the wet because I was strong, to have a small advantage to use [for] the first lap on the slick."