Valentino Rossi believes Marc Marquez is 'thinking like a child'

Rossi outlined during the pre-Malaysian Grand Prix press conference that he felt Marquez was 'playing' with the Italian and Ducati's Andrea Iannone at Phillip Island last weekend, in a bid to help countryman Lorenzo's title chances.

While Marquez denied the accusation, Rossi stood by his statements later on Thursday at Sepang, believing it stemmed from incidents earlier this year, namely their last-lap collision in the Dutch TT.

When asked why Marquez would interfere with Rossi's race, he told media: "Because he would prefer Lorenzo to win.

"He is angry at me for a personal matter.

"Although he never said it, he thinks that in Argentina I made him crash; and then at Assen he is still thinking about the last chicane, in his head he feels he should have won that race.

"Since then he has been angry and thinking like a child: 'I do not win, but you do not win either'.

"At this point, the lesser evil is for him is for Lorenzo to win."

Rossi added he now considers Marquez an "obstacle" in the title fight with his Yamaha team-mate.

"If he's faster yet slows down to get involved in the battles further back, it could become difficult," he said.

"Because he has nothing to lose, but I do, I have to be wary. I'm sorry and I'm quite angry.

"I did not expect that Marquez was an obstacle for this championship, I thought I was only fighting against Jorge, as it should be."

Marquez and Lorenzo had sought to defuse Rossi's comments in the press conference by countering that when the Honda rider took the lead on the final lap, it helped the Italian leave with an 11-point advantage rather than six.

"Marquez was a step above everyone, but instead of trying to try to battle Lorenzo, he stayed with me to fight with Iannone and others," Rossi added.

"He knew that I was losing out to the Ducati on the straight. And so every time I tried to pass him, he re-overtook me. 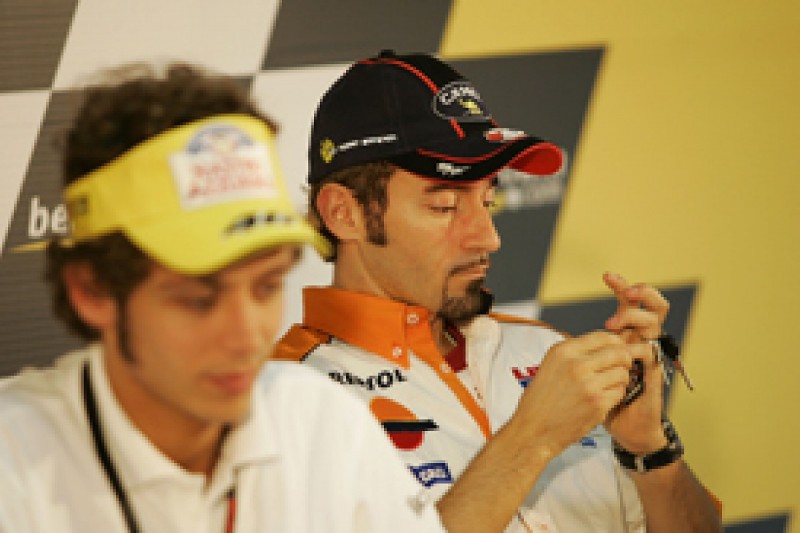 "But then he slowed to create a gap to Jorge. His bad luck was that on Sunday Jorge was not so strong, because otherwise it would have been over already.

"Instead, he always kept Jorge in check, knowing that he could catch him within three laps, and then tried to slow me and Iannone, perhaps trying to put other riders between me and Lorenzo."

When Rossi's high-profile rivalry with Max Biaggi was broached, Rossi said he would rather deal his outspoken countryman's approach than Marquez's.

"In the long run, I prefer more his behaviour," he said of Biaggi.

"We were obnoxious to each other, but at least it was clear and honest."