Valentino Rossi says he was "very uncomfortable" riding his Yamaha MotoGP bike in the dry at Valencia, as he struggled to qualify a low-key 16th on the grid

Rossi missed out on an automatic Q2 spot after he only took 13th place in FP3 - in which he also had a highside crash.

He was then a lowly 22nd in FP4, the first dry practice of the weekend, and could not advance from a Q1 session in which works team-mate Maverick Vinales, Jorge Lorenzo and Andrea Iannone also featured.

Rossi revealed that he had some pain in his left shoulder due to his FP3 crash, but ultimately placed the blame on his own struggles with the YZR-M1.

"It was a very difficult day for me," Rossi commented.

"After yesterday's practice in the wet I was quite optimistic to be strong, because I felt good, but this morning in FP3 I was not fast.

"I tried to push at the beginning but I crashed. After from that, afterwards I used the other bike but I didn't have the pace. 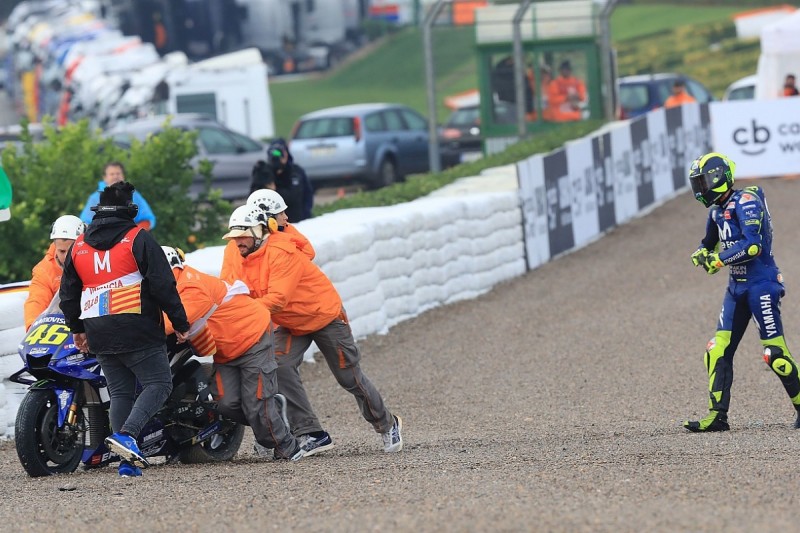 "We modified something for the afternoon but at the same time the conditions are different, getting drier, but in reality in FP4 [and qualifying] I never had a good feeling with the bike.

"I felt very uncomfortable. I can't push, and I was quite slow. For tomorrow I have to start from very [far] behind so it will be hard.

"The hit was big because I crashed from very high and I put ice [on the injury] because I have some pain. I took some painkillers but for riding it's not a problem."

Rossi added that getting a good feeling under braking was the primary cause for his problems.

"For me a lot of trouble [was that] in braking I never stop," he explained.

"I had front locking, so I arrived always too fast into the corner, but also under acceleration I didn't have a lot of grip, so it was very difficult to ride.

"I tried but I was not fast enough."

Vinales went on to pilot the sister works Yamaha to pole position.