Mir is the first new MotoGP champion since Marc Marquez in 2013 and becomes the first rider to win the world crown in Moto3 and the premier class, after coming home a safe seventh place in the Valencia GP.

Miller got the better run into Turn 1 off the line, but ran wide and allowed Morbidelli to come back through, while his SRT team-mate Fabio Quartararo went off at Turn 2 after running out of room in the braking zone.

This dropped Quartararo down the order, with his race lasting until lap nine when he crashed at Turn 6 having once again dropped out of the points, completely ending his championship hopes.

Mir navigated the opening lap safely, putting his Suzuki into 10th while Suzuki team-mate Alex Rins had leaped up from 14th to seventh.

Morbidelli engaged supremely consistent pace in the opening laps to quickly build a buffer over the chasing Miller and KTM of Pol Espargaro.

By lap seven his lead stood at seven tenths of a second, with Morbidelli opening that gap up to 1.2s by the 13th tour.

Then the SRT rider's lead started to come down, with Miller getting to within one second by lap 18 and continuing to eat into Morbidelli's advantage over the next few tours. 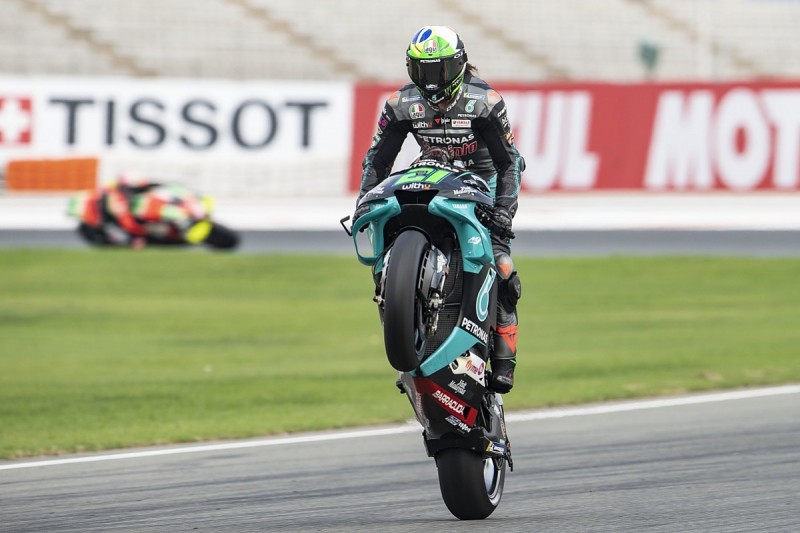 With five laps to run, Miller was just three tenths behind Morbidelli, though the Italian responded in turn to get his lead back up to half a second.

Miller nailed his run out of the final corner to use the brute power of the Pramac Ducati to pass Morbidelli into the first corner at the start of the final lap, and just about held on despite running wide.

The Italian clung on by 0.093s on the run to the chequered flag to score his third win of the 2020 season, with KTM's Pol Espargaro a distant third.

Alex Rins was fourth on his Suzuki, but it wasn't enough to delay Mir's coronation. Rins beat Brad Binder (KTM) and the Tech3 of Miguel Oliveira.

Takaaki Nakagami crashed out late on at the final corner attempting to take third from Espargaro, while Joahnn Zarco fell from his Avintia Ducati on lap six.

Not since Kenny Roberts Jr in 2000 has Suzuki won the riders' title in the premier class, with Mir becoming just the sixth Suzuki rider in history to be crowned MotoGP world champion.