Reigning MotoGP champion Marc Marquez was fastest in the opening practice at Valencia, which was red-flagged early on due to weather conditions

The session started under soaking wet track conditions, which are forecast for the whole of the final weekend of the campaign.

The red flag came out just seven minutes in, soon after Alex Rins impressively but narrowly avoided a crash the long left-handed penultimate corner and Maverick Vinales ran through a huge puddle at the exit of the final bend.

It took nearly 30 minutes for the rain to ease off and practice to be restarted, and the pace then rapidly improved in the first half of the session.

Marquez dominated the proceedings by improving numerous times and leading by over a second but when he pitted the field quickly caught up and Danilo Petrucci demoted him to second with a 1m40.479s.

But once Marquez returned to the track he set a 1m39.787s in just two laps, a time that was not matched by the rest of the field.

Jack Miller quickly closed the gap to just 0.086 seconds and he looked set to improve further with just two minutes on the clock, only to crash at the Turn 10 right-handed kink. 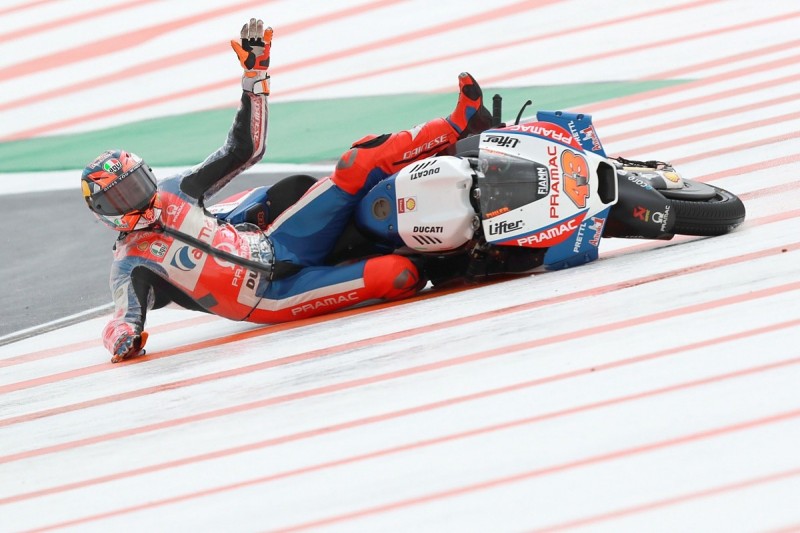 Marquez then lowered his benchmark by another two hundredths of a second after the chequered flag fell to increase his gap over Miller to 0.106s.

Dani Pedrosa kicked off his farewell weekend in fifth, followed by Andrea Iannone and Maverick Vinales - the Yamaha rider ending up more than a second off the pace.

Valentino Rossi had an off-track moment and was in the end only 12th ahead of fellow Yamaha rider Johann Zarco.

Stefan Bradl, who is replacing the injured Cal Crutchlow at LCR Honda, was 16th, while the recovering Jorge Lorenzo took 19th.

Along with Miller, fellow Ducati privateers Alvaro Bautista and Xavier Simeon also crashed in the dying stages of the practice.

Why Valencia testing is the best and worst for MotoGP riders