Scott Redding admits he may be out of MotoGP for 2018

Pramac Ducati rider Scott Redding has admitted his future in MotoGP is "not in my hands", and concedes he may be forced to switch to World Superbikes for 2018

Redding will not be retained by his current team, which is set to announce it has signed Jack Miller for 2018 alongside Danilo Petrucci this month.

A return to his Moto2 and 2015 MotoGP team Marc VDS Honda appears to be Redding's best hope of remaining in the grand prix paddock.

He has also been linked to a switch to WSBK, where he could join leading satellite Ducati squad Barni in an expanded two-rider line-up.

Redding said on Thursday he was having to wait on other riders to finalise their 2018 plans.

"At the moment it's not in my hands," said Redding.

"I'm waiting for other people to make decisions.

"I have to pick up what's left and make the most of it, which I'm happy to do.

"I want to stay in this paddock because I believe, at my age, I'm 24, that I'm still young and I've got potential and I've worked really hard for it.

"I've just struggled the last couple of years with luck, with being in the right place at the right time.

"I have to wait and see. I'm kind of just waiting to see where it goes." 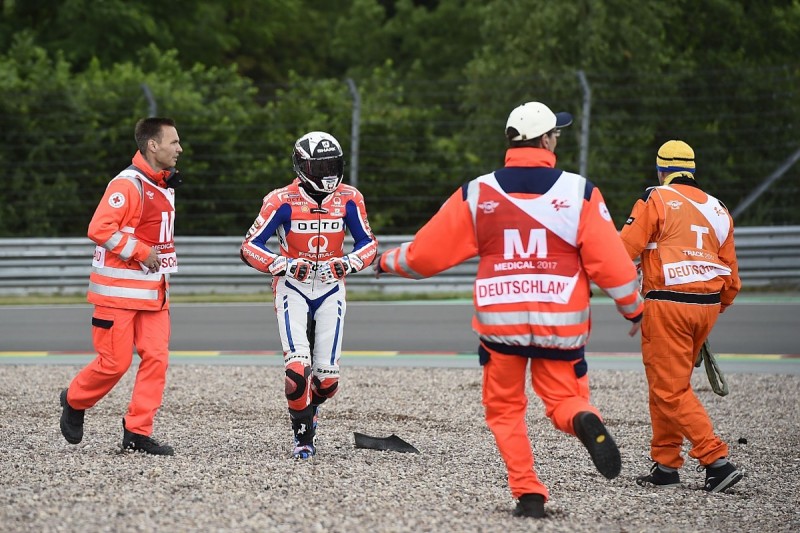 Redding has had a tough 2017 season, sitting 13th in the points with a best finish of seventh in the Qatar season-opener on board the year-old GP16 Ducati.

His team-mate Petrucci, who has the latest-spec GP17 at this disposal, has taken two podium finishes in the last four races and sits eighth in the standings ahead of Brno.

Despite admitting he has an "option" to move across to WSBK in 2018, Redding stressed this was not his preferred choice.

"At the end, if there isn't anything here [in MotoGP], I have an option for Superbike," Redding added.

"But I don't really want to go there unless I can fight for the championship.

"I'm not worrying too much about it. If [my grand prix career] ends, it ends. I have to keep working hard here, which I enjoy doing, and then we have to see what happens."

Miller has refused to confirm his Pramac deal is complete, but said on Thursday he hoped to "sign something soon".