Aprilia rider Espargaro was hit with a three-place penalty during the wet-dry Brno race for an unsafe release from his bike swap, which caused Suzuki's Iannone to take evasive action and crash.

Despite the punishment, Espargaro managed to finish the race in eighth, while Iannone was able to continue on his second bike to a 19th-place finish.

Espargaro said it was his Aprilia's crew fault for not warning him Iannone was approaching, but argued mistakes were likely to happen in the pits with the current rules about changing bikes.

"I'm happy that Andrea has no injury because it was a scary crash, nothing I could do really," Espargaro said.

"I have no mirror, so it was the team's fault.

"But when the team or myself makes a mistake, it is a team fault, so [I] say sorry from me and Aprilia to Suzuki and Andrea. The important thing is that he's OK.

"In the future I think it's good to re-check this rule because it's very easy to make a mistake. I think it's something that we need to discuss." 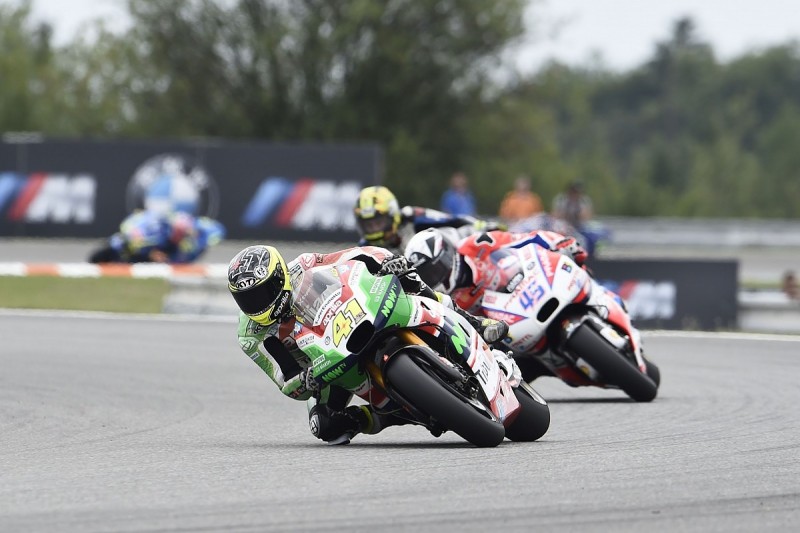 Espargaro said his preference would be to adopt a rule similar to the World Superbike Championship, which stipulates a minimum pitstop time that riders must adhere to or face a penalty.

"For me the best rule is the Superbike one," he explained. "You have time and you can be relaxed because everybody will spend the same time in the pitlane.

"It's something that we really need to think about and change because if the bike hits one mechanic's leg, it can destroy the leg of the mechanic or something worse.

"So for me in the next safety commission, [it's] something that we have to really talk about."

Iannone crashed braking on a wet drain cover while trying to avoid Espargaro, and in the process damaged the handlebar of team-mate Alex Rins's second bike.

Further time was then lost as Iannone's second bike had not been changed to a dry set-up.

"[It had a] slick tyre in front and a wet tyre in the rear," said Iannone.

"The box made a mistake and this is a big problem for us. After the crash, I stood up very fast, and if the bike was ready I could fight for points, for sure."