Honda rider Marquez has never lost at the German Grand Prix venue since graduating to the premier class in 2013, and his streak of wins dates back to his 2010 triumph in the 125cc class.

He holds a 41-point lead over nearest rival Valentino Rossi after scoring his fourth win in eight races at the most recent event at Assen.

It means that Marquez is assured of the title lead heading into the summer break - but the Spaniard is adamant he won't take any undue risks in pursuit of another Sachsenring win.

"Maybe [it will be] tomorrow, maybe next year, but for sure some day somebody will beat me here.

"But the most important is the championship, Rossi's second, [Maverick] Vinales is third, it's more important [than the race win]." 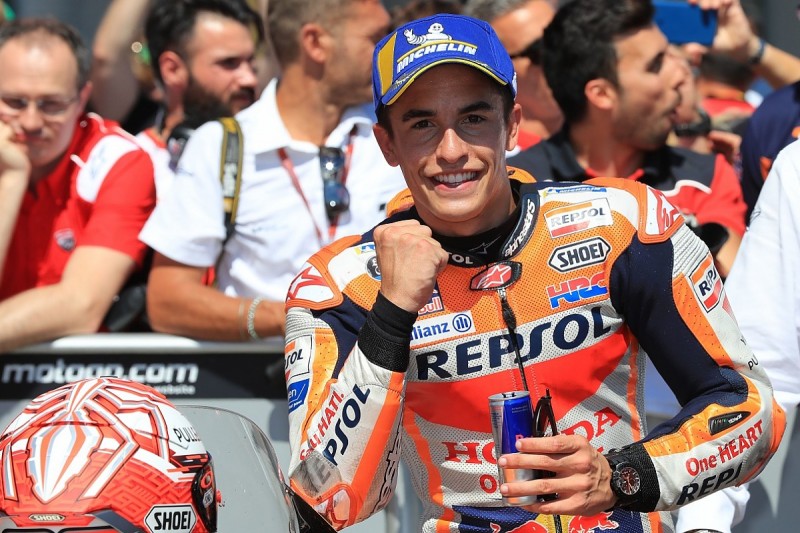 Marquez secured pole position by just 0.025 seconds at the end of a typically frenetic pole shootout, in which the top six riders were split by less than two tenths.

The 25-year-old feels that the atypically warm conditions at the Sachsenring so far this weekend have allowed his rivals to perfect their set-ups and close in.

"At the Sachsenring normally we have always some wet sessions, and this weekend is the first time that it's completely dry, everybody has time to find the best set-up, find the lines," he said.

"If you check a little bit my first run in FP1, I was already on [1m]21s, so for me I adapted very quickly, but then everybody arrives, and now many riders will have the same pace more or less.

"But I feel strong, I feel well. It will be a difficult race, because especially the last 15 laps the tyres drop a lot for everybody, but you need to manage it and that part of the race will be the key."

Marquez's Repsol Honda team has not been beaten at the Sachsenring since 2009, with his five successive wins in the premier class preceded by a hat-trick for Dani Pedrosa.