Sachsenring MotoGP polesitter Marc Marquez says he apologised to Maverick Vinales immediately after qualifying for the German Grand Prix, following the pair's collision at the second corner in Q2

Marquez - who secured his eighth-successive Sachsenring pole across MotoGP's three categories on Saturday - was trying to keep his tyres at operating temperature during the wet session when Yamaha rider Vinales came across him on a flying lap.

Vinales scythed up the inside of Marquez on the run to the Omega corner, but ran wide on its exit.

Spaniard Marquez said he believed his compatriot would remain off the racing line, but Vinales drifted back over and the pair touched in the middle of the corner.

Vinales was visibly frustrated by the incident, but Marquez said he thought it was nothing more than a "misunderstanding" brought about by his unusual line through the corner.

"With Maverick, it was a little bit of a misunderstanding there," said Marquez.

"I was pushing, I was trying to keep the rhythm on wet tyres, especially in the beginning and I overtook him.

"I was pushing just on another lap, but maybe my line in Turn 2 is very different; I go in really slow and try to keep the gas.

"But he overtook me from the inside, he go a little bit wide and, honestly, I expected that (he was) going (to stay) wide.

"But then (he) came back earlier than what I expect and we have some contact. I already said sorry to him, but the most important thing is both of us stayed on the bike."

Vinales chose not to dwell on the incident, but warned he would not hesitate to be aggressive with Marquez should a similar situation arise.

"In qualifying [it] happens," said Vinales, who struggled to 11th in qualifying. 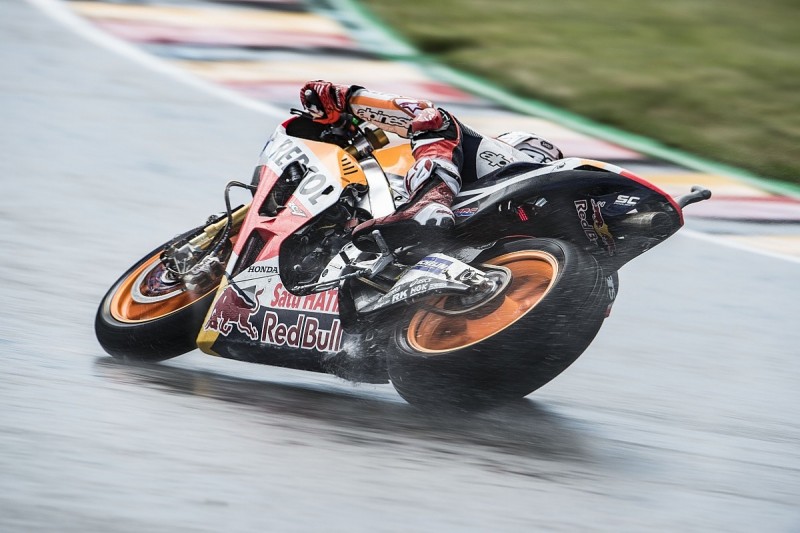 Honda rider Marquez will start Sunday's race 11 points behind points leader Andrea Dovizioso but nine places ahead of the Ducati rider on the grid - who heads the fourth row and starts alongside nearest rival Vinales.

Marquez said the pair's qualifying struggles, as well as his strong form at the Sachsenring, presented him with a great opportunity to claw points back in the title race.

"It's something that is not in my hands," he said.

"I can win the race, but if Dovi or Vinales finish second still I'm there.

"But of course, it's a circuit that I will have some possibility to make close the gap from the top guys and we will try.

"We do not have this opportunity every weekend, but my main target is to try to finish in front of all of them to be closer in the championship."