Second in the opening practice for the German Grand Prix earlier in the day, championship leader Marquez very nearly crashed on his first flying lap in the afternoon when he lost the front of his Honda at Turn 1 - but shrugged off this moment to post the new fastest lap of the weekend, a 1m21.113s, a few minutes later.

This left Marquez three tenths clear of Rins, before Petronas Yamaha's practice one pacesetter Fabio Quartararo set the new benchmark just past the halfway point of the session, edging the reigning champion by just 0.013s as he overcame what had been a quarter-second deficit after two sectors.

With fewer than nine minutes left on the clock, Rins vaulted to the top spot courtesy of a 1m21.046s set using a new hard rear tyre.

But both Marquez and Quartararo emerged on fresh soft rear rubber right afterwards, and this allowed the champion to reclaim the lead with ease - courtesy of a 1m20.705s effort. 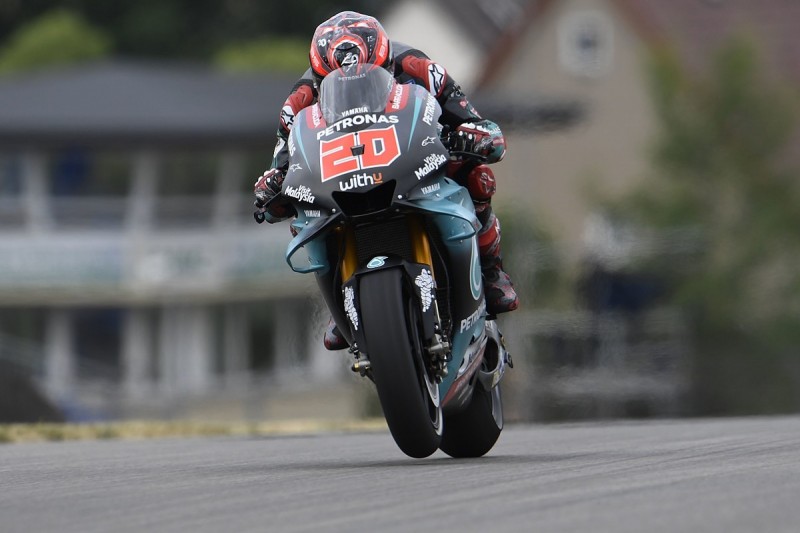 Quartararo's initial improvement was a lot more modest, as he came up just short of overhauling Rins and was then baulked by team-mate Franco Morbidelli on the next lap - which left the French rookie enraged.

He couldn't improve after that, which meant Rins was secure in second place despite failing to find more lap time on a soft rear tyre in the closing minutes.

Maverick Vinales was fourth, while KTM rider Pol Espargaro made it four Spaniards in the top five after following Vinales' works team-mate Valentino Rossi on his fastest lap - with Rossi ending up 10th.

The injured Cal Crutchlow took sixth for LCR Honda. Pramac's Jack Miller was the lead Ducati rider in seventh, with works duo Danilo Petrucci and Andrea Dovizioso within 0.04s of him right behind.

Aleix Espargaro was the top Aprilia in 11th, 0.005s behind Rossi, while Jorge Lorenzo's factory Honda stand-in Stefan Bradl was 0.988s off Marquez's pace in 14th.

Pramac Ducati rookie Francesco Bagnaia sat out the session, having gone to the local hospital in Chemnitz for an MRI after complaining of a headache following his morning crash.