Petronas SRT’s Valentino Rossi says he was “too conservative” on his final lap in MotoGP French Grand Prix qualifying and admits an earlier moment affected him in the last sector.

The Italian made his first Q2 appearance since the start of the 2021 season at Le Mans, with both he and team-mate Franco Morbidelli gambling on slicks straight away in Q2 as the track continued to dry.

Rossi’s second lap was set to put him onto provisional pole, but he was almost flicked from his Yamaha at the last corner when he touched a damp patch and lost the time.

This robbed Rossi of confidence for the remainder of the session and he could do no better than ninth in the end as Yamaha stablemate Fabio Quartararo claimed pole.

However, he doesn’t feel he would have gained anything more by switching to another fresh slick for a second run as the conditions constantly changed.

“In the Petronas team we make the right choice, the right strategy,” he said.

“My coach Idalio Gavira gave to us the right way and we started with the slicks, and it was a small advantage for us.

“Unfortunately on the second lap I took a wet patch on the last corner and I was very close to crashing, so this made me lose some feeling especially in section four.

“And also in the last lap I was too conservative, so if not maybe I could do a bit better. 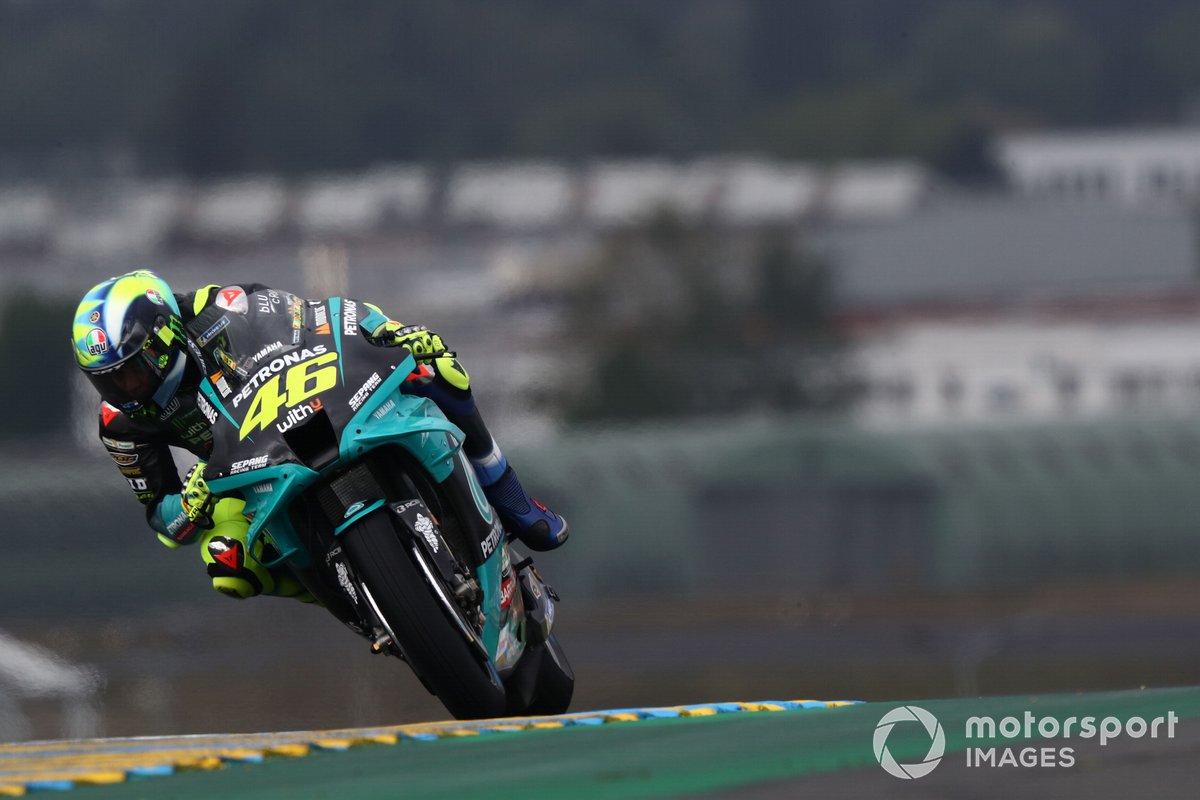 “To put a new tyre on the rear [for a second run], I don’t think it would have been a big help because it’s much better to stay on track to improve the feeling because we were faster lap by lap.

“So, I don’t think if we put in a new tyre we would have had a big advantage.”

Team-mate Morbidelli was able to put his two-year-old Yamaha fourth on the grid for Sunday’s race, but is nursing a knee injury after an odd pitlane incident in FP3.

Morbidelli hurt his knee training ahead of the Le Mans race, and during a flag-to-flag bike swap practice in FP3 he fell over as he felt his knee was going to “pop out” when he put pressure on it.

“My knee is not really stable at the moment,” he said.

“And when I went to swap bike and I stomped on my left leg I just needed to let go because the knee, I felt it wanted to pop out.

“So, I just let go and crashed onto the bike instead of jumping on it.

“I had a moment at the ranch training, but I didn’t crash.

“Just to recover from it, I needed to put my leg on the ground and as you saw my knee is weak. So, it started to give me pain from last week.”