Valentino Rossi thought he would be able to catch Cal Crutchlow and win MotoGP's Australian Grand Prix from 15th on the grid, when Marc Marquez crashed

The Yamaha rider qualified a lowly 15th at Phillip Island, his worst result in six years, and surmised that a win was "quite impossible".

However in the first real dry running of the weekend, Rossi was second-fastest in Sunday morning's warm-up, and took third place at the start of lap 10, which became second to Crutchlow moments later when leader Marquez crashed at Turn 4.

Having sliced his way through the field, Rossi was within two seconds of Crutchlow and fancying a win, but ultimately had no answer for the LCR Honda rider.

"This morning when I woke up and I opened the window I was already more happy," Rossi said.

"The warm-up gave me a lot of positive power and I was more relaxed, because I knew that I had a good pace and I knew that I could make a good race and arrive on the podium.

"I think the first 10 laps were very good, I enjoyed it very much.

"Cal was my target, I thought I could beat him, because this morning I was a bit stronger than him.

"When I saw Marquez crash, I thought that I could win.

"I tried, but unfortunately for me, Cal was too fast and too strong. He's always very fast at Phillip Island." 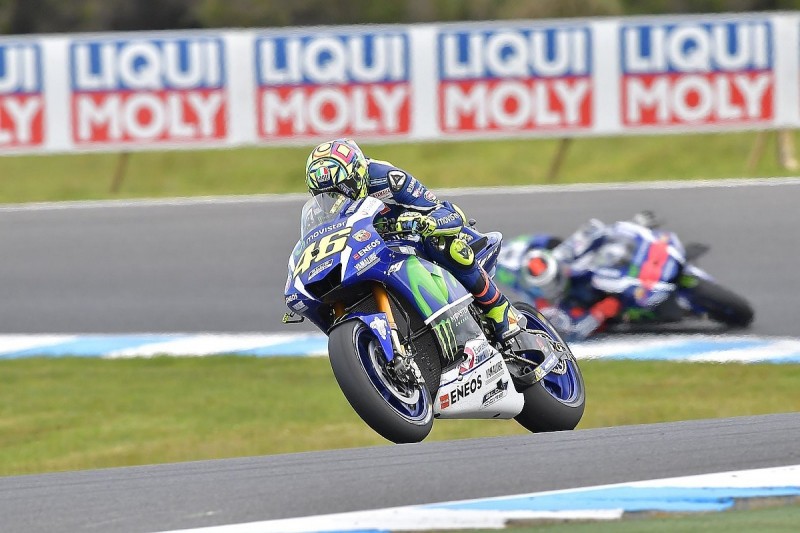 Rossi crashed out of last weekend's Japanese GP at Motegi early, ending any chance he had of catching Marquez to win the title, and after his torrid Saturday said the result "is what we needed".

It also boosts Rossi's lead over team-mate Jorge Lorenzo to 24 points in their battle for second in the championship, with two races to go.

Lorenzo started three places ahead of Rossi in 12th, but his progress, finishing a quiet sixth and 20.125s behind Crutchlow.

"For sure, gaining 10 points on Jorge is important, but it's still not closed.

"What we need is to be strong in the last two races and try to make races like today and try to fight for the podium, and after we'll see."

ROSSI'S EARLY CHARGE
Valentino Rossi's rise through the order in the first half of the Australian GP.