Seven-time MotoGP world champion Valentino Rossi has named the three race victories he considers his "best", and reveals the rivals which spurred him on most in his career

Should the 2020 MotoGP season get underway, it will his 21st in the premier class and mark his 24th year of grand prix racing, having made his full-time debut in the 125cc class in 1996.

Rossi hold the record for most premier class (500cc/MotoGP) wins of any rider in history on 89, and has tallied up a total of 115 across all classes - ranking him second on the all-time winners' list behind Giacomo Agostini's 122.

As part of BT Sport's 'Greatest Race' series, Rossi revealed which of his 89 MotoGP wins stands out as his best.

"In my personal ranking of the victories of my career, I have three victories [that I rank as the best]," the factory Yamaha rider said.

"They are Welkom [in South Africa] 2004, which was the first victory with the Yamaha; Laguna 2008, the battle with [Casey] Stoner; and Barcelona 2009, the battle in the last corner with Jorge Lorenzo.

"Those are my best three."

One of Rossi's most remembered wins was his battle with then-Ducati rider and reigning world champion Stoner at Laguna Seca in '08 - which featured the famous Corkscrew overtake from Rossi on the Australian, when he took to the gravel to complete the pass. 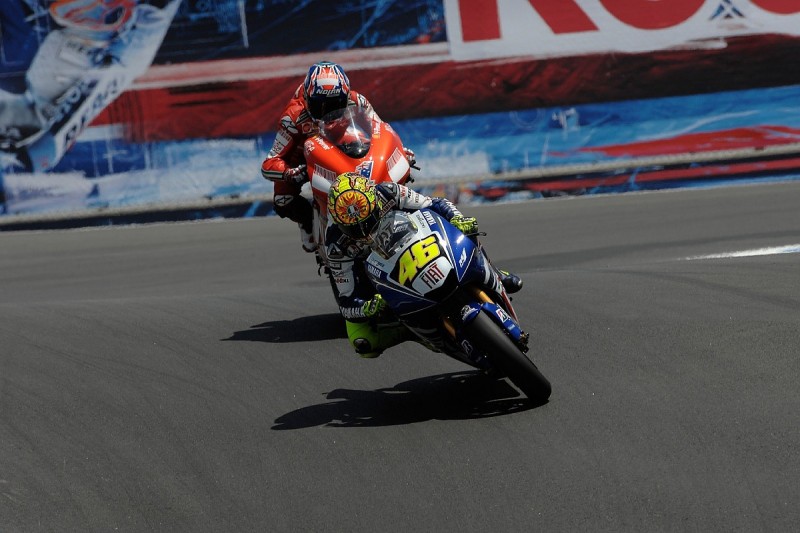 Reflecting on that race, Rossi added: "That race was a special victory. [It] was very important because in that moment Stoner was really, really strong and Stoner beat me in 2007 and won the championship with Ducati.

"When we arrived at Laguna Seca, that weekend was crucial for the rest of the championship because Stoner was incredibly fast in that track with the Ducati.

"I thought that the key was to try to stay in front and set my on rhythm on the race because Laguna Seca is very difficult to overtake at because it's very narrow.

"The battle was furious from the beginning to the end, but I was able to arrive in front."

Rossi would go onto seal the '08 title, winning his seventh and so far final championship the following season.

Stoner proved to be one of several rivals who pushed Rossi hard in his career, as well as the likes of Lorenzo, Max Biaggi and Sete Gibernau.

Commenting on his rivalries, Rossi says "for sure" those riders helped him to improve as a racer.

"I had great, great battles with Max Biaggi, Sete Gibernau and later with Jorge Lorenzo, and when you have a rivalry like this, it is the fuel to increase the performance of everybody, to raise the level.

"Because the fight starts, and after it becomes something a little personal.

"So, this means that it can give you more to arrive in front and the level is raised."

Watch 'The Greatest Race' live every Sunday at 10am on BT Sport 1, as Neil Hodgson and Gavin Emmett continue their quest to find the greatest MotoGP race of all time.