Valentino Rossi has lamented front-end grip issues with his Yamaha MotoGP bike in cold and wet conditions, after qualifying 15th for the Australian Grand Prix

The Italian was only 12th fastest in Saturday morning's practice session, which meant he had to line up in the first phase of qualifying for the second time since the format was introduced in 2013.

Rossi was in the mix to take the second Q2 spot behind LCR Honda's Cal Crutchlow as conditions improved at Phillip Island, but he ran out of time to make a late switch to an intermediate rear tyre work.

"It was a very strange day when it comes to the conditions, because they changed continuously and unfortunately we were never strong, starting from this morning," he said.

"We are a little bit worried because, though we know in these conditions it is difficult for everybody, I never felt the right feeling on the wet and the dry.

"Yesterday morning we started quite well, but today we had some problems so we start towards the back of the grid.

"We hope for better conditions because it looks like with our bike we suffer a bit.

"It depends very much on the pace what happens tomorrow, it looks like when it is very cold we struggle to get the tyres up to temperature and the bike becomes very difficult to ride." 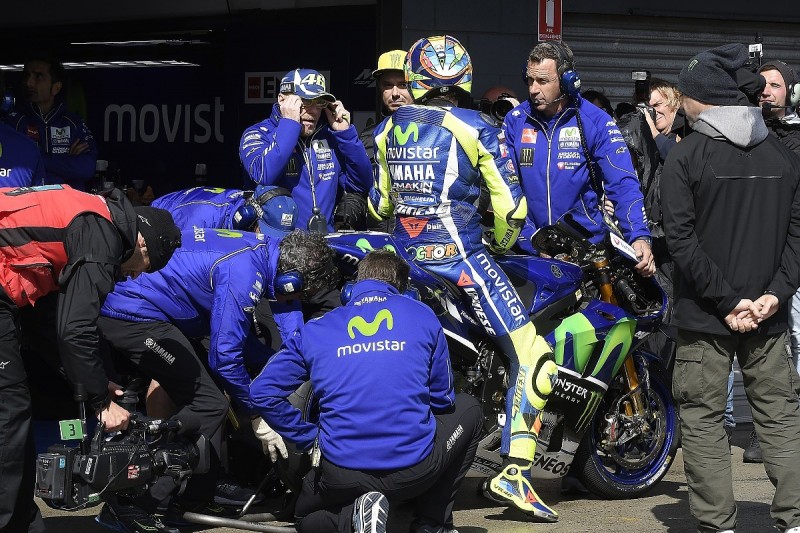 Rossi will start in 15th place, three spots behind his Yamaha team-mate Jorge Lorenzo, who reckoned it was "not possible for me to be fast" on Saturday.

It was Rossi's worst qualifying result since 17th at Aragon in 2011, during his troubled Ducati stint, and he has turned his attention to salvaging some form of a result on Sunday.

"Starting from 15th is a problem for sure," he said.

"If you want to try to win it is quite impossible, but if you are fast you can do a good race.

"The changing circumstances on track made it difficult to get heat into the tyres to improve the level of grip, so it was easy for the riders to be caught out," he said.

"Jorge did well during the first qualifying session and kept his head to secure exactly the result he needed.

"It was a shame that he couldn't get a feel for the drying circuit in Q2.

"Valentino had a good first run in Q1, but when he opted for a new tyre combination to accommodate the drying line for his second stint he just ran out of time to make it work.

"Tomorrow we hope for either a full dry or a full wet race."