British Grand Prix winner Alex Rins says he was nearly left to rue a "very big mistake" in the race, as he lost track of the number of laps during his fight with Marc Marquez

Rins bested championship leader Marquez in an exhilarating late-race duel at Silverstone that culminated in Rins' last-gasp pass and yielded a 0.013s margin of victory.

But the Suzuki rider admitted he had mistakenly thought that the race would be over the lap before, which is what motivated him to make his first attempt to pass Marquez round the outside of Woodcote the lap prior.

"My tactic during the middle of the race, I was able to recover a lot of tenths on the last corner," Rins said.

"On the [previous] two corners [Brooklands and Luffield] he was much faster, he went like 0.5[s quicker] every lap on T16, T17, [but] I recover a lot of time on the last corner.

"At the end last lap I was recovering a lot of time to him, and I did a very big mistake, two laps to the end I was thinking [it] was the last lap, I tried to overtake him on the outside and I saw him [still] going full gas." 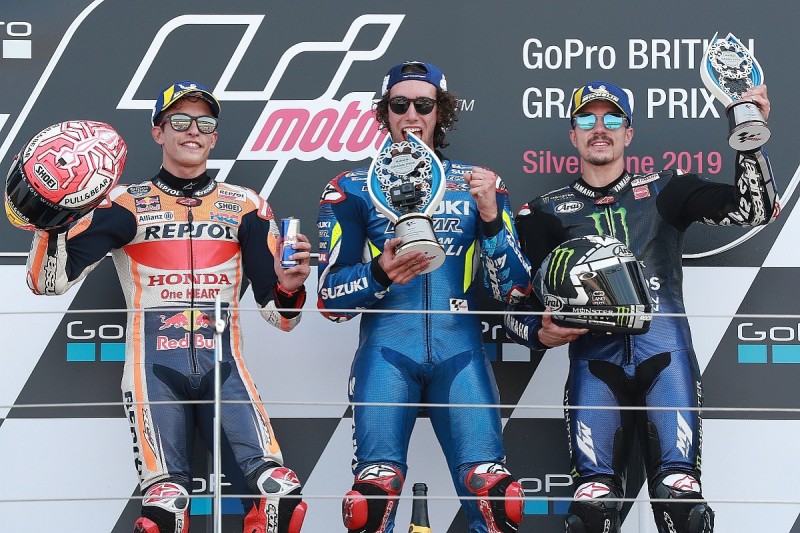 Rins had crossed the start-finish line 0.001s ahead of Marquez to begin the final lap, but dropped behind the Honda rider once more and was left to wait until Woodcote again to make the decisive move.

His earlier attempt meant Marquez was already anticipating a repeat manoeuvre, but the championship leader said he chose not to risk a crash by staying on the throttle in the very last corner.

"Already two laps to the end he [Rins] showed me where he would attack, in the last corner - but I said 'okay, I don't have more grip, I will try'," Marquez said.

"I tried to defend in the braking points, that was my strong point, but on the last corner I tried to be even more inside.

"I was very, very fast, but suddenly at one point both wheels started to slide.

"And then you have two options - [one of them is] keep going and try to win the race or crash.