Fabio Quartararo says it’s “nice” that the top three in the MotoGP standings are split by just 17 points despite his lead being wiped out by a crash at Aragon.

The Yamaha rider had a 30-point advantage in the championship whittled down to just 10 to Ducati’s Francesco Bagnaia after Quartararo retired on lap one of the Aragon Grand Prix due to a collision with Marc Marquez.

With Bagnaia second behind Enea Bastianini at Aragon and Aprilia’s Aleix Espargaro completing the podium, the top three of Quartararo, Bagnaia and Espargaro are covered by just 17 points ahead of this weekend’s Japanese GP at Motegi.

“At the end, what can you do?,” Quartararo said when asked about his Aragon race on Thursday in Japan.

“I think right now with 17 points around all three… I would not say it’s like the beginning of the championship, where everyone is pushing like hell.

“But I think all three – and Enea [Bastianini] included – want the championship.

“But especially having only 17 points between us three means we will push ourselves to the maximum, and at the end I think it’s nice.” 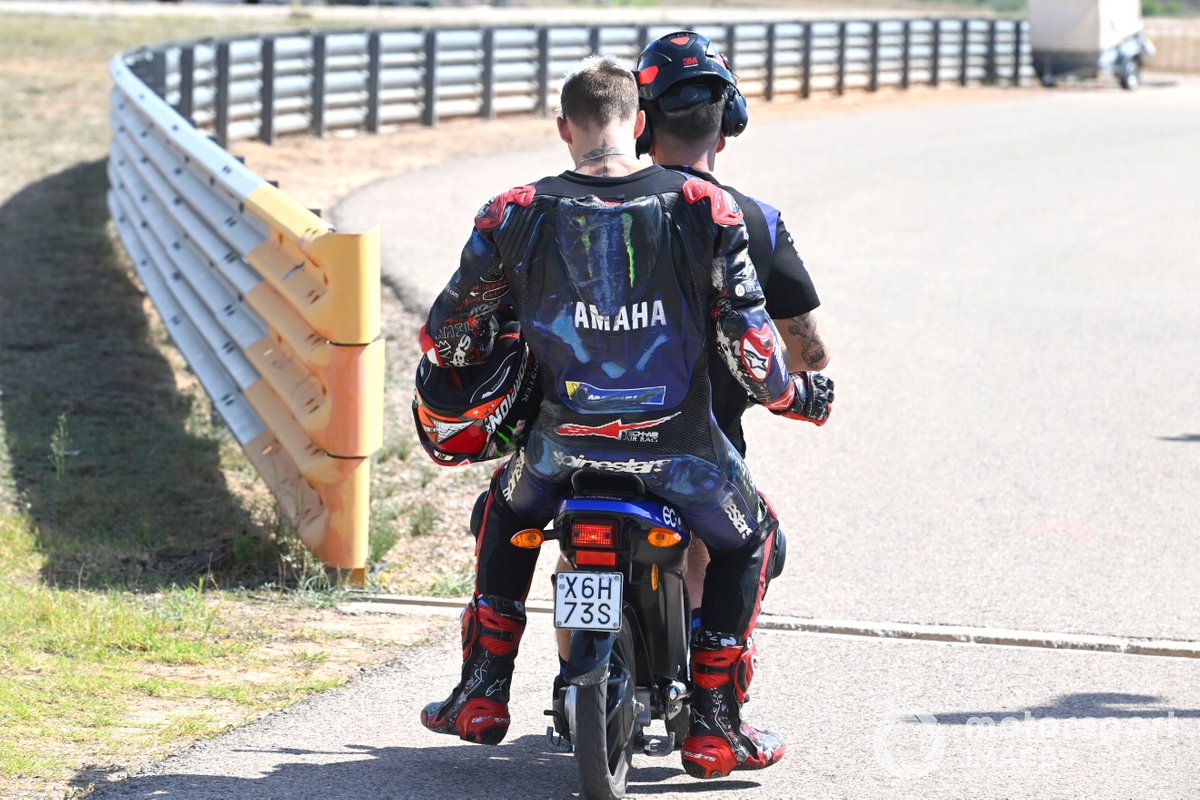 Quartararo suffered abrasions to his chest in his Aragon tangle with Marquez when his Yamaha clobbered him in the accident, which forced massive load onto his Alpinestars leather suit and burst it open.

Though sore, Quartararo doesn’t expect the injury to cause him any problems this weekend.

“I had my first training, so it was ok,” he said about his chest injury.

“It’s just an abrasion. So, it’s a little bit painful but I think on the bike it’s not going to be a big issue.

With his championship lead shrinking and the Yamaha at a disadvantage when it comes to on-track racing, Quartararo says his approach to races now won’t change as the title battle nears its conclusion – citing lessons learned from his 2020 duel with Joan Mir.

“To be honest, I always try to race at my maximum,” he added.

“And I think this is a lesson I learned from 2020, when with Joan when I gained one point on him I was happy.

“At the end, last year even when I had 30, 40 points [advantage in the standings] I was still trying to fight for the victory and give my maximum.

“So, this year is the same. I never had a big advantage, but of course I will give my 100% during the last five races but I was already giving my 100% before. So, in terms of riding I don’t think it will really change.”

This weekend’s Japanese GP – the first since the COVID pandemic began – is set to be heavily affected by wet weather.

Though its conditions that have affected Yamaha riders in the past, Quartararo says he no longer has “fear” about rain-hit races after a strong run to second earlier this year in similar conditions at the Indonesian GP.

“I think also in 2019 the grip level here was really high,” he said about a possible wet weekend at Motegi.

“I remember also a race with Marc [Marquez] and [Andrea] Dovizioso [in the wet in 2017], they were super-fast.

“So, the more grip there is on the track the better it is for us. Mandalika was super good.

“So, I think now there is no reason to have any kind of fear about having a wet race. Of course, I enjoy it more in the dry but I think there’s not a big issue in the rain.”