Yamaha’s Fabio Quartararo admits he is facing the “toughest job of my career” to win the 2022 MotoGP world title after crashing out of the Australian Grand Prix.

The reigning world champion has lost the lead in the standings for the first time since the Portuguese GP back in April, with Ducati’s Francesco Bagnaia 14 points clear at the top and able to win the title next week in Malaysia.

Quartararo was running inside the top eight when his race at Phillip Island on Sunday began to unravel on lap four of 27 when he ran off track at Turn 4.

Recovering back into the points in 15th after this, Quartararo crashed out at Turn 2 on lap 11 to register his third non-score in four races.

With Bagnaia finishing third in the race after being pipped by Suzuki’s Alex Rins and Honda rider Marc Marquez, Quartararo’s title defence may only last seven more days if Bagnaia can outscore him by 11 points next weekend at Sepang.

Explaining his two errors, Quartararo said: “It was not the race I expected, it was a tough day, especially the first mistake in Turn 4.

“We were quite good, then it was difficult because I was behind, trying to overtake the others.

“But I was trying to save the tyres, but then I pushed way too much on the entry [to Turn 2].

“There was not much difference in corner speed [into Turn 2 when I crashed], but out of Turn 1 I was much faster [than before].

“This was my mistake, that corner, it was not easy to recover.

“But now we need to turn the page and we only have one job, which is try to win and it’s going to be the toughest job of my career. But I’m ready to fight for it.” 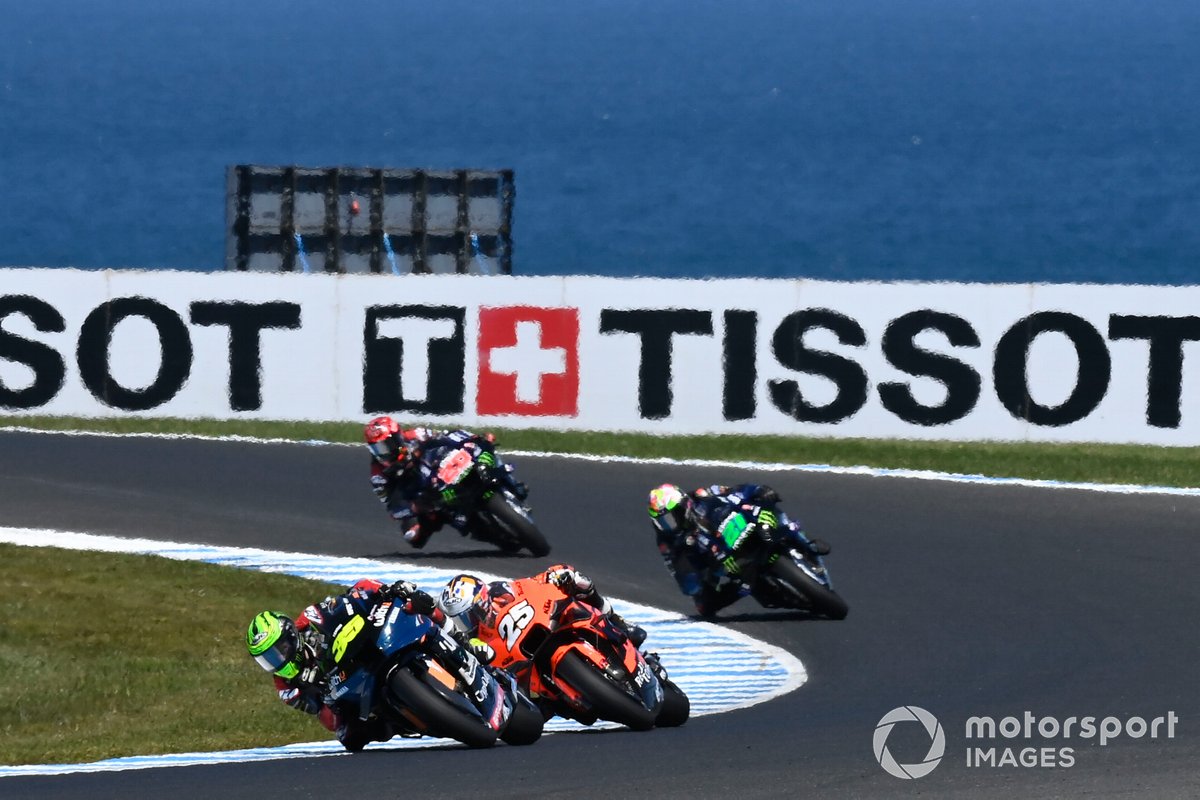 Quartararo concedes that the lack of top speed and rear grip on the Yamaha forced him to “override” his bike on Sunday, which ultimately led to his errors – though noted that the main issue with the M1 is the fact that the riding style required for it is too different to the other bikes on the grid.

“Yes, I’m riding over the limit. But for me this is not the problem,” he added.

“The problem is we ride in different way to the others, so when I’m alone you can always see my pace is super strong.
“Then when we are in the race, it’s always difficult. So, I think we need to make a bike that – for the future – can be suited to win races and less thinking about having the most corner speed as possible. It’s to suit the bike to [match] the others.”

Quartararo also brushed away suggestions that his current rough patch is similar to how his 2020 title bid faded, when he went from leading the championship to eighth in the standings across the final six rounds.

Asked if he was feeling the same pressures he did in 2020, he said: “No. Actually, 2020 was mentally and technically.

“But just I’m trying to do my best. I’m overriding so much and the risk of having a mistake is really close.

“So, that’s what happened today. Actually, when you need to save the tyres and you miss grip and acceleration, it’s not the best.

“Actually, today I’ve made the mistake of braking too hard and going wide in Turn 4. But this is the thing we need to understand. We need more rear grip because we need to save the tyres and have the best drive possible.”