Marc Marquez set the initial pace in the third 45-minute session of the Silverstone weekend on the Honda, going top initially with a 2m00.598s, which he improved to a 2m00.152s on his next tour.

He was briefly dislodged from top sport by home hero and LCR Honda counterpart Cal Crutchlow, though Marquez would soon move the goalposts further with the first 1m59s lap of the day of 1m59.972s.

Marquez bettered this after 10 minutes to a 1m57.743s, though was once again deposed by Crutchlow, who was the first of the frontrunners to put in a time attack on fresh soft rubber.

Crutchlow's 1m59.184s proved the fastest time of the weekend so far and the fastest ever lap of Silverstone on a MotoGP bike, and allowed him to open up an advantage on the timesheets of 0.559s.

However, Friday pacesetter Quartararo soon fired in the first sub 1m59 lap at the circuit, moving 0.283s clear of Crutchlow with a 1m58.901s - which the Petronas SRT rider improved next time around to a 1m58.727s.

This came under minimal threat for most of the remainder of the session, though 2015 Silverstone race winner Rossi on the work Yamaha started to light up the timing screens in the closing moments.

Marquez moved back up to third late on, though some 0.366s off the pace, ahead of Pramac's Jack Miller - who was forced to abandon one of his GP19s after it developed a technical issue on the run to Stowe Corner 25 minutes into the session. 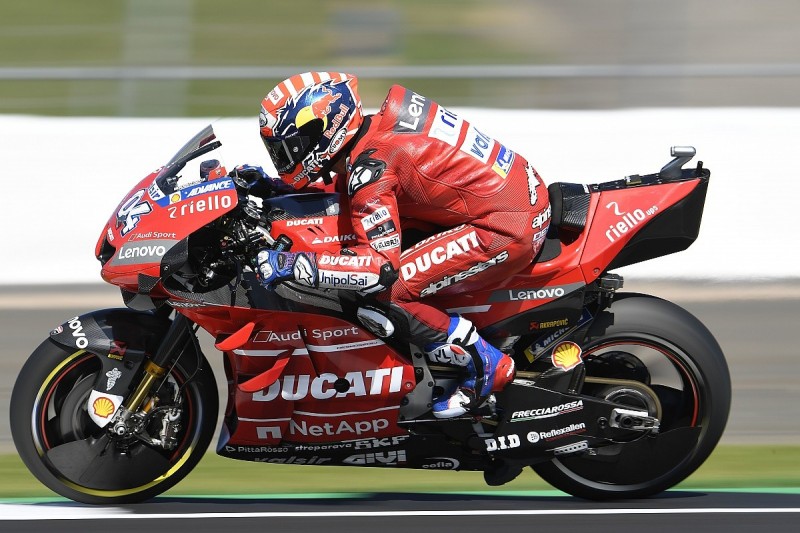 Ducati's Danilo Petrucci did manage to lift himself into a Q2 place, but team-mate Andrea Dovizioso was unable to do the same and ended the session just over a tenth outside of the top 10 in 14th.

Crutchlow headed the sister Yamaha of Maverick Vinales, with the second SRT bike of Franco Morbidelli, LCR's Takaaki Nakagami and Aprilia's Aleix Espargaro - who will make his first Q2 appearance since the French GP - completing the top 10.

Alex Rins will face the first qualifying segment alongside Dovizioso this afternoon, after the Suzuki rider missed out on a place by just 0.011s.

Jorge Lorenzo's difficult return to action continued this morning, with the Honda rider failing to advance on 21st and only finding four tenths of laptime over his Friday.