Quartararo: Battle for ninth with Mir in French MotoGP "like fight for victory"

Both Petronas SRT's Quartararo and Suzuki rider Mir struggled in their first wet MotoGP race, with both riders dropping down the order early on and eventually crossing swords on the final lap.

Both riders battled through problems in warming up their rear wet tyres, while Mir was forced into a recovery rider after taking avoiding action by Valentino Rossi's crash at the Dunlop chicane on the opening lap.

Mir overtook Quartararo on the last lap at the Garage Vert double-right corner, before the SRT rider launched his Yamaha up the inside at the following Chemin aux Boeufs section to claim the ninth spot, with Maverick Vinales splitting the pair at the finish to push Mir back to 11th place.

This ensured Quartararo's led over Mir at the top of the standings has increased by two points to 10, with the SRT rider admitting that battle was the only point he thought about the championship during the race.

"I think that it's the first time in the race I'm thinking about the championship," Quartararo said when asked to comment on his battle with Mir. 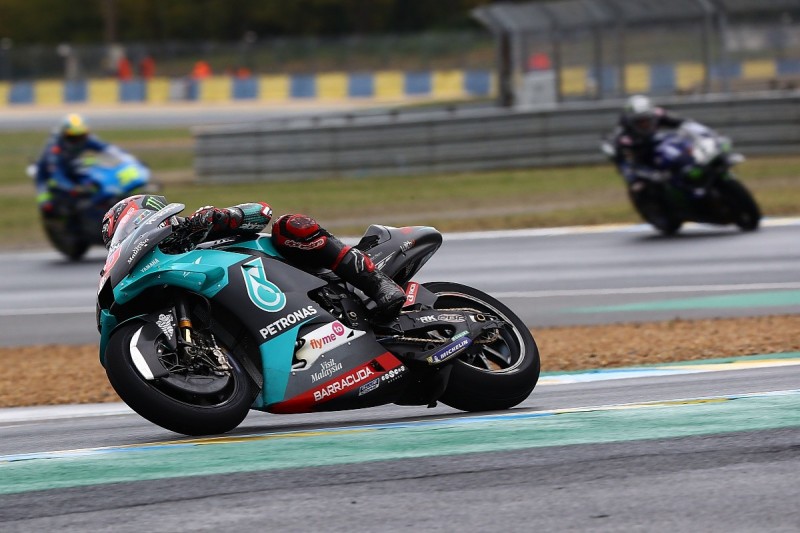 "When Joan overtook me, I said 'no way, I will not finish without trying something'.

"I braked so hard in Turn 9, I overtook him, pushed him a little bit wide but I was also wide because I was over the limit.

"I think it was quite fun and everyone gave his 100% even if they say they don't want to win this championship, everyone wants to win it. So, was quite fun despite that I would prefer to finish [further] in the front. But this one was quite a great overtake."

Quartararo says he "risked a lot" in the race as he ran with a wet set-up he hadn't tried before based on what he learned in the wet FP1, but found it offered a "better feeling" than what he had on Friday.

"We risked a lot, what I asked to the team is we make a big change on the bike and let's see how it's going, because in FP1 I was feeling really bad," he explained.

"And actually, it was a better feeling. [I was] Still struggling a lot to warm up the tyres, but I was a bit worried before the race because I never tried the setting I will be racing.

"The first race in the wet, first race we try this setting, I was on pole position.

"So, I was a little bit nervous, but it was great to see that we need to take some risk and today we went with a setting we never tried on the wet and was not so bad."